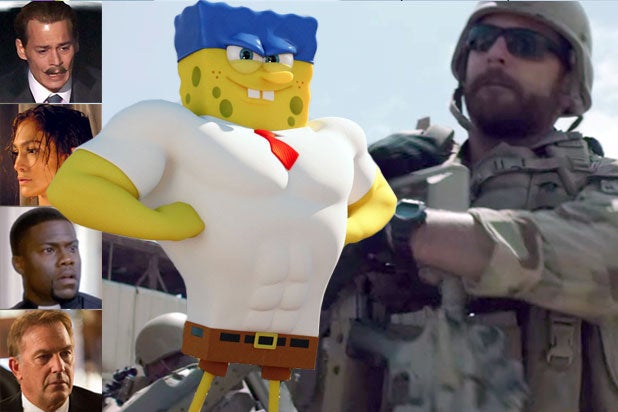 Kevin Hart, , and couldn’t knock “American Sniper” out of the top spot at the box office, but a certain Hollywood heavyweight with a pineapple condo is about to do just that.

Would you believe it’s SpongeBob Squarepants?

Paramount Pictures’ animated kids film “The SpongeBob Movie: Sponge Out of Water” is tracking to open with around $35 million on Friday. That should be enough to end the three-week reign of the Iraq War saga, as well as beat “Jupiter Ascending” and “Seventh Son,” the weekend’s other two wide openers.

That the yellow fellow from Bikini Bottom will finally knock off “American Sniper” doesn’t diminish what distributor Warner Bros. and Village Roadshow have accomplished with the Clint Eastwood-directed drama starring Bradley Cooper. Nor does the fact that on Monday it came up a few thousand dollars short of breaking the Super Bowl box office record this weekend, it’s third straight at No. 1.

After obliterating records for the Martin Luther King holiday and January with a stunning box-office blitz that made it the highest-grossing war movie ever, “American Sniper” is heading for a final domestic total north of $350 million. That means it will eventually overtake “The Hunger Games: Mockingjay – Part 1” as the top-grossing movie released in 2014. Even though 97 percent of the $248 million that “Sniper” has grossed has been generated this year, its four-theater Oscar-qualifying run began on Christmas Day.

But the calendar isn’t what counts in this case.

“You couldn’t ask for more than they’ve done with this movie,” said BoxOffice.com senior analyst Phil Contrino. “The marketing behind it was really strong and it absolutely shattered expectations. And just like ‘Frozen’ did last year, they’ve pretty much carried the box office at the start of the year.” Disney’s animated blockbuster opened in November of 2013, but played into June of 2014 on its way to $400 million domestically.

Also Read: Bradley Cooper on ‘American Sniper’ Controversy: Anything That Sparks Discussion on Plight of Soldiers Is ‘Fantastic’

“American Sniper” is the biggest reason that the 2015 overall box office is running nearly 9 percent ahead of last year. Its grosses provided 24 percent of the January box office, which topped $1 billion for just the third time ever. The only movie to dominate like that has been “Avatar,” which accounted for nearly 30 percent of the January 2008 haul, which was the biggest ever.

Conventional wisdom says that a rising tide — i.e. a major hit movie — lifts all boats, in this case the overall box office. But that hasn’t happened so far this year, and the success of “Sniper” may have sucked some of the air out of the marketplace.

Twentieth Century Fox’s “Taken 3” and the Weinstein Company’s “Paddington” are the second and third-highest earners released this year, but far behind “Sniper” with $89 million and $49 million respectively.

Kevin Hart’s R-rated comedy “The Wedding Ringer” has delivered for Sony Pictures, but other than “Sniper,” no movie has broken out. Universal Pictures has started slowly with a low-budget hit (“The Boy Next Door”) and a pricey miss (“Blackhat). Neither “The Woman in Black 2: Angel of Death” nor “Black or White” made waves for Relativity Studios. Lionsgate whiffed with Johnny Depp‘s “Mortdecai,” as did Disney with George Lucas‘ “Strange Magic,” Paramount with “Project Almanac” and Open Road Films with “The Loft.”

So while rival studios can appreciate the hard work behind the success of “American Sniper,” they probably won’t be entirely sad to see SpongeBob make his splash.