The year 2021 is starting to feel A LOT like the 90s. JLO and Ben Affleck are dating. Nelly’s hit single “Lil Bit” is top of the charts. Britney is dominating the headlines, while Jennifer Anniston and David Schwimmer are rumored to be dating. Oh, and did I mention Rachael Leigh Cook and Matthew Lillard are in a new film where the most popular kid in school bets that they’ll turn the class dweeb into the most popular kid in schoo?l That’s right, the “She’s All That” stars are back for the gender swapping remake of the 90s rom-com, “He’s All That.”

In the new Netflix rom-com, Lillard stars as Principal Bosch, while Cook plays Anna Sawyer, the mother of Padget Sawyer (Addison Rae) who accepts a challenge to turn the school’s least popular boy Cameron Kweller (Tanner Buchanan) into prom king. WrapWomen recently spoke with actress Isabella Crovetti, who plays Cameron’s sister Brin Kweller in the film, about what it was like putting a modern-day twist on the 90’s teen classic and getting to work with the original cast.

Up until seven months ago, Crovetti had never heard of “She’s All That.” Despite watching the film prior to the audition, she remained unaware of the film’s popularity. According to the actress, her ignorance along with getting to play a new character, helped alleviate some of the pressure. “I’m almost glad that it’s not a film that I grew up with or anything… I get to have my own spin on it,” she said. 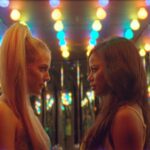 Also Read:
‘Zola’ Star Taylour Paige Worked as a Stripper for a Month to Prepare for the Role (Video)

Crovetti also told WrapWomen that getting to work with the original cast members was an unforgettable experience. Her only regret is s not asking them more questions.

“Rachael Leigh Cook was so sweet,” she added. “She doesn’t age, I feel like we can all admit we’re very jealous of her.”

Despite her newfound love of the original film and cast, Crovetti admires how “He’s All That” is set in modern times, rather than throwing it back to the 90’s. “For me, growing up as a teenager with social media, they haven’t made a lot of movies with things like Instagram and TikTok,” she said. “Now, we have all of that put into the high school dynamic… this is like the first like modern high school remake movie.”

Now, after seeing both the original and remake of the film, Crovetti says that she is honored to be a part of such an iconic revival.