I’m sorry, Adam Lambert fans.  I’ve been thinking, and I take back those nasty things I said about your guy.

I would love to see him performing on the Oscars, just as you all suggested to producer Adam Shankman on Sunday.

I read your comments on Twitter after I suggested otherwise, and you forced me to reconsider with remarks like this: 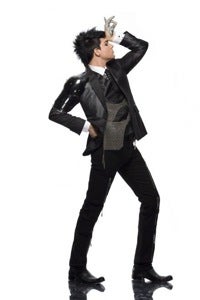 “What is your problem? How you homophobic or just plain hater?”

“@StevePond can drown in himself.”

And now, as you might have guessed, a confession: you didn’t really change my mind. I still don’t think Lambert should be on the show.

But it’s not because I hate him, or because I’m homophobic.

The fact is, I think Lambert is pretty good. I think he should have won “American Idol” last season, and the fact that the perfectly pleasant Kris Allen did speaks to the conservatism of the voters, and maybe to something worse. (Let’s just say that the Entertainment Weekly cover essentially outing Lambert just before the finale probably didn’t help his cause.)

I went to one taping of the show this past season, when Lambert performed Nina Simone’s “Feeling Good,” and I thought he was spectacular, in that insanely melodramatic way of his.

But look, the Oscars are not “American Idol,” or the Grammys, or a variety show. They are not a showcase for performances. They are designed for a single purpose: to honor the best film achievements of the year.

If a song isn’t nominated (and I absolutely agree that they often nominate the wrong songs), it doesn’t make sense to perform it on the Oscar show.

And the times when musical numbers are inserted into the show not because the songs have earned a spot on the Oscar stage, but because the producers want to add entertainment value, have consistently been moments when, to me, the show has run off course.

In that judgment, I include everything from the Lord of the Dance in 1997 to last year’s bloated Hugh Jackman/Beyonce medley.

And here’s the deal: there is NO REASON for “Time for Miracles” to be performed on the Oscar show. It’s not eligible in the best-song category, because it wasn’t written specifically for the movie. It couldn’t have been, since one of its songwriters died before “2012” was ever shot.

(You probably don’t want to know my opinion of the song, but I’ll tell you anyway: it’s well-sung schmaltz, with wildly if likeably over-the-top production that just might make it a guilty pleasure if it didn’t get so danged overwrought at the end. Sorry, but I was never a Power Ballad kind of guy.)

If there’s another song that gets nominated … and if that other song makes sense for Lambert’s voice … and if the original performer doesn’t want to do it on the Oscar show … well, then I’m open to Lambert. Unless it’s say, a song like “The Weary Kind” from “Crazy Heart,” which needs an understated, low-key performance. (Adam is a lot of things, but understated is not one of them.)

And if Shankman wants to work Lambert into a medley or something, I’ll listen with an open mind.

Of course, before listening I still might cringe, and I might argue that singing one song in a bad movie and “doing musical theater for years” is not enough of a resume to qualify a performer for the Oscars.

But I don’t hate Lambert. Honest.

I just think that the pop flavor of the moment (who may be the flavor for years, for all I know) deserves to be showcased in lots of places. But the Academy Awards is not one of those places.

If you still want to try to change my mind, feel free.

And if anybody wants to suggest who else might be great on the Oscars, or what Adam Shankman really ought to do to guarantee an exciting show, my ears are open and the comment boxes are waiting below.

I’ll compile and revisit the best suggestions in a couple of days.