The ground has shifted beneath what for the better part of the century have been among America’s most reliable and desirable products: movies and television shows.
This thing called the Internet came along. And now anyone, anywhere in the industry will tell you this: Hollywood must adapt in order to survive.
But how?
The industry has faced challenges before. For decades through the end of the 20th century, the multi-billion-dollar economic freight train that is the entertainment business has met each threat posed by innovation by growing bigger still. Video enhanced the revenue stream of movies. Cable broadened the television audience. The international market became a source to rival domestic. DVDs were a bonanza at the dawn of the new millenium.
But cracks have formed in the hard earth that has been the bedrock of the popular culture and media consumed by people around the world.
Those cracks are evidenced in the broad changes in consumer behavior set in motion by Google, Facebook, YouTube, Digg and a host of other new companies that for the most part did not even exist a decade ago.
Some worry that Hollywood’s very survival is at stake. True or not, the changes have already ushered in a cast of new characters that dominate the decisions individuals make about how they spend their leisure time. Millennial-generation digital entrepreneurs like Mark Zuckerberg of Facebook and Kevin Rose of Digg are displacing once-omnipotent Hollywood players such as DreamWorks’ David Geffen, who has just retired, or Michael Eisner, the former Disney mogul who has remade himself and is now a minor figure in the world of new media.
Thus far attempts to figure out exactly what a successful digital-era Hollywood venture will look like have met with scant success.
“People truly do not understand the extent to which new media is not a business,” said Marshall Herskovitz, the veteran television producer who last year declared his independence from the networks and created “quarterlife,” a web series and social media hub. “It’s remarkably not a business. I’m speaking from painful experience.”  [Read the full interview.]
Herskovitz managed to make money from a single episode of the series that ended up airing on NBC before the show was cancelled. But he lost money on the 36 episodes that were streamed on Myspace and the show’s own site.
There are small signs that a web-based TV business could eventually be viable. Warner Bros Television has resurrected its popular-but-unsuccessful WB network as TheWB.com in August, and is offering their cancelled hits like “Gilmore Girls” as well as original programming for the site, which is attracting about 250,000 unique visitors per month.
But even for the Internet, that’s a moderate-sized audience. Perez Hilton’s one-man gossip site gets about 1.5 million unique visitors per month.
The star TV producer Josh Schwartz, creator of “Gossip Girl” and the “The O.C.,” is  writing a series for TheWB.com about a group of friends who hang out in a rock club, with a social media component built in to the show. But to make economic sense, Herskovitz says, Schwartz will need to aggregate about four times more viewers than the site reaches on average.
“The moment of convergence is where you can create serialized video for 1 million viewers” on the web, he said. “I don’t think we’re that far off from that. But no one knows how to do it. And no one knows how to market that show.”
As for the movies, the fear that dramatic change is just over the horizon is palpable among professionals. No matter that the sum total of box office dollars continues to rise, even as attendance is less than robust.
“In five years, the pillars of this industry are not going to be here anymore,” said Mike Binder, an actor-writer-director who has been working on a new Internet venture, as is just about anyone in Hollywood who has registered the uncertain future. “I want people with vision to have an opinion and really illuminate what this industry is and where it’s going.”
In fact, one needs only to look at the sad roster of recently failed independent movie companies – the Yari Company, New Line, Revolution  – to worry about the future of independent film. The talk of Sundance this year has been about the urgent need to find a business model that works for specialty pictures. Netflix and other Internet solutions have helped, but not nearly enough to justify the cost of maintaining large distribution companies.
Back here in the present, one thing is certain: The Internet has has caused a sea change in the daily habits of the average American: 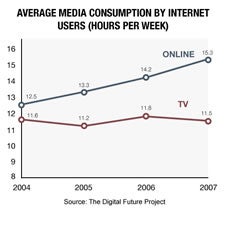 Consumers now spend an average of 15.3 hours a week online, an increase by an hour over their average in the previous year and the highest level recorded yet, according to the latest study by the Digital Future Report.
The Kansas State University anthropologist Michael Wesch has found that the amount of video content created by YouTube users, for free, in six months is more than the broadcast networks produced in 60 years of paid, professional programming.
YouTube produces some 9,232 hours of new video every day.
(Feel free to re-read that sentence a few times.) It’s not mass programming. But as an aggregate, it creates a smorgasbord of satisfying entertainment and the opportunity to take part in “participatory culture.”
Therein lies the shift that will determine Hollywood’s fate in the age of the Internet. Web culture, and the businesses connected to it, are all about transparency and collaboration and adaptive improvisation. Companies share and connect in a spirit of “co-opetition.” It is additive, and iterative in nature. Failure is seen as merely a necessary prelude to success.
All that makes the web a very different environment than the cutthroat entertainment industry familiar to the world from countless novels and movies over the decade, .  “Day of the Locust,” “The Player,” or that enduring depiction of the life of a talent agent, “Swimming With Sharks."That culture clash may be the trickiest part of all. But the blood is already in the water. As people spend more time online, the legacy entertainment industry has been acutely feeling the shift. 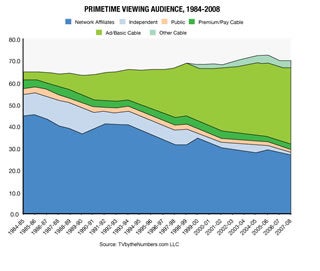 1. Broadcast viewership of prime time television declined eight percent last year , according to Nielsen Media Research. Before that, annual declines were typically one to two percent since the early 1980s. 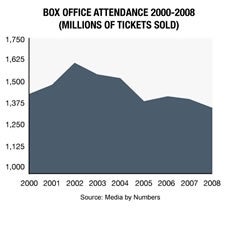 2. Movie attendance has declined for five out of the past six years, including five percent in 2008.
3. DVD sales, a source of revenue that has ripened past maturity, fell 9% in the U.S. in 2008.
In a recent talk to entertainment lawyers, CBS President Les Moonves said his network still had not figured out how to make money on the Internet.  “We’re losing money on the Internet,” he told the crowded hall. “Scripted content doesn’t yet work.”
Moonves’ candor only reinforces a sense of foreboding, limned by the fear that movies and television may share the fate of the music industry, whose business model collapsed with astonishing speed.
The current crumbling of print media, visible in the declining fortunes of America’s great newspapers, feels like another bellwether of potential disaster for Hollywood. Since December alone, the sprawling Tribune Company – owner of The Los Angeles Times and The Chicago Tribune – has declared bankruptcy, as has the Minneapolis Star Tribune. The infusion of $250 million to The New York Times by a Mexican billionaire may only temporarily help that cash-needy touchstone of American journalism.
Still, not everyone believes that as goes the music industry and newsprint, so must go television and film. “I think Hollywood is going to be fine,” said Chris Anderson, the editor of “Wired” magazine, who is working on a new book called “Free: The Future of a Radical Price.”
The experience of seeing a movie in a darkened hall, with hundreds of strangers, will endure, he said. Piracy, the obsession of studios like Warner Bros, is a false bogeyman. In Anderson’s view, illegal downloading only whets the consumer appetite for going to the movies.
“People make the mistake of conflating all the mediums and thinking trajectories are going to be the same,” said Anderson. “I think my children will be going to movie theaters when they’re my age.” But, he added, “They won’t be buying CDs when they’re my age.”
Anderson’s children more than likely have already stopped buying CDs. And soon enough, Anderson concedes, DVDs (including Blu-Ray) will also be on their way to the dust-bin of history.
Then there’s the recession, which has exacerbated and accelerated the changes going on in the format of popular culture. The media conglomerates that own the Hollywood studios have been tightening their belts, many of them laying off  up to 10 percent of their personnel, in an attempt to fend off the economic wolves at the door.
So what’s the solution? Keep reading, Hollywood! The story of the new digital-era reality is being written right now. Times are rough and the landscape is confusing. But every culture needs its storytellers, its dream-makers and its popular artists. The key to Hollywood’s successful transformation will lie not only in its ability to build new business models adapted to the web, but in its ability to understand and adopt the cultural changes it has wrought.
We will not have the answers today. But it’s a subject The Wrap will explore continually as Hollywood embarks on this great new adventure. Please comment. Contribute. Give us feedback. Above all, make yourself at home in our community — today and every day going forward.
x
Looks like you're enjoying reading