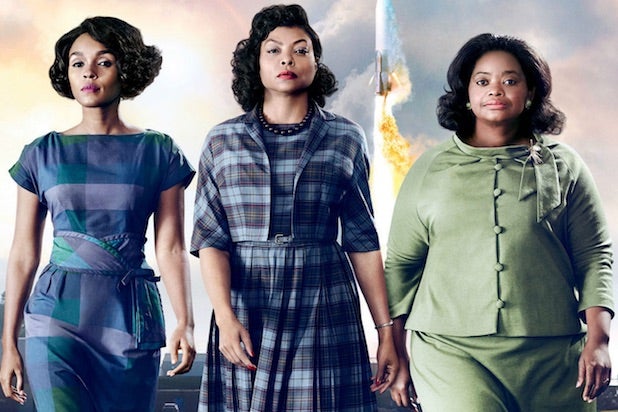 Over the three-day weekend, the film starring Janelle Monae, Octavia Spencer and Taraji P. Henson earned $20.8 million. That’s a modest 9 percent drop from last weekend, when it earned $22.8 million to claim No. 1.

According to Huffington Post, “Hidden Figures” is also the first movie with multiple female leads to top the box office for two straight weekends since 2011’s “The Help.” That movie stayed at No. 1 for four weeks.

Illumination Entertainment and Universal’s animated hit “Sing” placed second with an estimated four-day tally of $19.2 million. That will bring the movie’s domestic total up to $238.4 million through Monday.

Lionsgate’s “La La Land” came in third after a record-breaking Golden Globes win of seven awards. Over the four-day weekend, it is expected to earn $17.5 million, bringing its total to $77 million.

Mark Wahlberg’s “Patriots Day” is estimated to earn $13.6 million this weekend, although box office analysts had predicted a $20 million opening.

Open Road Films released “Sleepless,” a thriller starring Jamie Foxx, Michelle Monaghan and Gabrielle Union. The indie company is expecting around $10 million for the four-day weekend ($8.5 million over the three days) on an estimated production budget of around $30 million.

Paramount already took a major writedown last September for its action movie, so many had anticipated the loss. But “Live by Night” and “Silence,” both high-profile movies with budgets of $65 million and $40 million, respectively, also underwhelmed at the box office.

“Live by Night” is expected to move just slightly past the $6 million mark this weekend after earning an estimated $5 million over the three days. Given a budget of $65 million, that’s not great.

“Silence” didn’t fair too well this weekend either. Expanding nationwide to 747 theaters, the movie starring Andrew Garfield and Adam Driver isn’t expected to earn more than $2.3 million. That would bring its cumulative to $3.4 million on a budget in the mid-$40 million range.

And “Monster Trucks” had a budget of $125 million, yet it will only gross an estimated $15 million over the four-day weekend.

“It’s a jungle out there right now and unless you are ‘Hidden Figures’ or ‘Rogue One,’ or a similarly successful movie,” Paul Dergarabedian, senior analyst at comScore, told TheWrap on Sunday. “It is going to very tough to become the next big thing at the multiplex.”

Final tallies for the MLK holiday weekend will be available Tuesday.