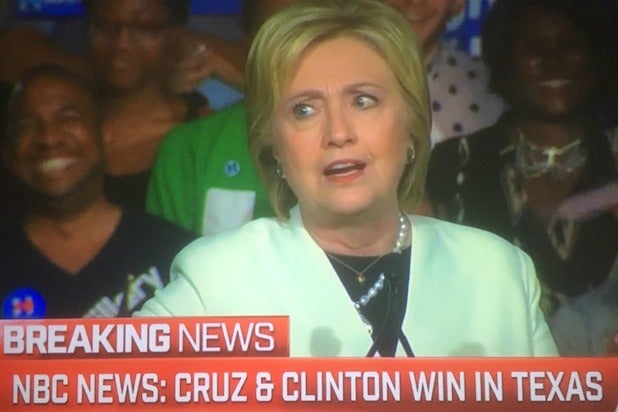 In a Super Tuesday speech thanking her supporters, Hillary Clinton skipped right past the messy work of winning the Democratic nomination and went straight to campaigning against presumptive Republican nominee Donald Trump.

It was a way of staking out what her arguments would be in a general election, but also of making herself appear to be the certain Democratic nominee. Her digs at Trump were just as much digs at her Democratic opponent, Bernie Sanders, because they seemed to presume she would be the one to take on Trump.

“America never stopped being great,” she said. “Trying to divide America between us and them is wrong and we’re not going to let it work. Whether we like it or not, we’re all in this together, my friends.”

The New York Times Monday offered voters a preview of what Clinton’s strategy might be against Trump in the general election, in a story headlined, “Inside the Clinton Team’s Plan to Defeat Donald Trump.” It said that some of Hillary Clinton’s inner circle, including her husband, believe only a “concerted campaign portraying him as dangerous and bigoted” could ensure a win against Trump.

It certainly looked like Clinton was trying out anti-Trump lines on Tuesday.

“In our country today Democrats voted to break down barriers so we can all rise together,” she said near the start of her remarks.

“This country belongs to all of us,” she added later. “Not just people who look one way, woship one way or even think one way. America prospers when we all prosper. America is strong when we’re all strong. And we know we’ve got work to do. That work is not to make America great again — America never stopped being great.”

One person trying to muck up Clinton’s plan to go straight to attacking Trump? Ted Cruz.

The Iowa caucus winner, whose candidacy seemed to fade in recent weeks, staged a comeback Tuesday night by winning not only his home state of Texas but also neighboring Oklahoma.

(Of course, Hillary Clinton has already handily defeated Trump and Cruz in one race: the one for celebrity endorsements. Check out the Wrap’s list of who in Hollywood is voting for which presidential candidate.)