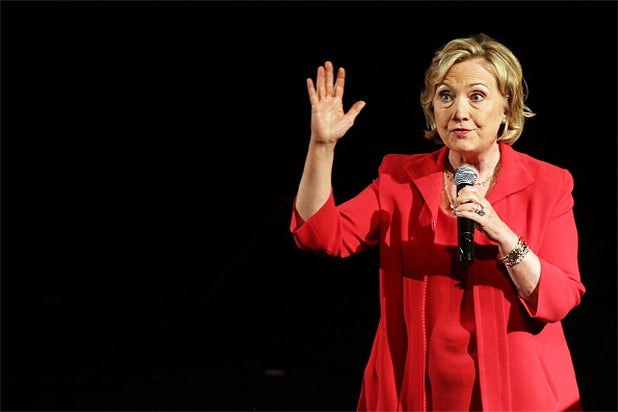 Former U.S. Secretary of State and potential 2016 presidential candidate Hillary Clinton spoke out about the events in Ferguson, Mo.

On Thursday, Clinton made her first remarks on the tense and racially charged situation that followed the fatal police shooting of unarmed black teenager Michael Brown on Aug. 9.

“This is what happens when the bonds of trust and respect that hold any community together fray,” Clinton said at a tech conference in San Francisco. “Nobody wants to see our streets look like a war zone. Not in America. We are better than that.”

Clinton didn’t hesitate to point to race as the center of the continued unrest.

She said, “Imagine what we would feel and do if white drivers were three times more likely to be searched than black drivers … if white offenders received prison sentences longer than black … if a third of all white men went to prison during their lifetime. Imagine that. That is the reality of the lives of so many of our fellow Americans and the communities in which they live.”

She also sympathized with Brown’s family. “Losing a child is every parent’s greatest fear and an unimaginable loss,” Clinton said. “Watching the recent funeral for Michael Brown, as a mother, as a human being, my heart just broke for his family.”

Clinton also referenced the relevance of Martin Luther King Jr.’s “I Have a Dream” speech. “We should all add our voices to those who have come together in recent days to work for peace, justice and reconciliation in Ferguson and beyond,” she said.

As recently as Aug. 24, Clinton was silent on the ongoing strife in Ferguson, even as reporters shouted questions at her while she left a book signing in Westhampton, N.Y.

Darren Wilson, the officer who shot and killed Brown, hasn’t been charged with a crime. Protests have continued in the Missouri city.