Hillary Clinton’s name has often been paired with the word “scandal” over the years — but maybe never more appropriately than on Monday, when the Democratic presidential frontrunner paid a visit to the set of the hit ABC show “Scandal.”

In town on her latest Hollywood fundraising jaunt, the former secretary of state and First Lady, who is riding high after her strong win in Saturday’s Nevada caucuses, stopped by the Shonda Rhimes drama and spent some time with leading man Scott Foley.

The star quickly tweeted, “So, this happened while I was directing tonight. No big deal #imwithher.”

So, this happened while I was directing tonight. No big deal. #imwithher https://t.co/PpRZBOSNvX

Also Read: Hillary Clinton Plays Patty Cake With Ellen DeGeneres in Round of Heads Up! (Video)

An Instagram selfie then confirmed that Foley was hanging with Clinton and the show’s fictional president, Fitzgerald Grant III, who is played by Tony Goldwyn.

This is not the first time Clinton has crossed paths with President Grant. In January, on another trip to L.A., the candidate played a game of Sidekick Heads Up! with him on “The Ellen DeGeneres Show.” 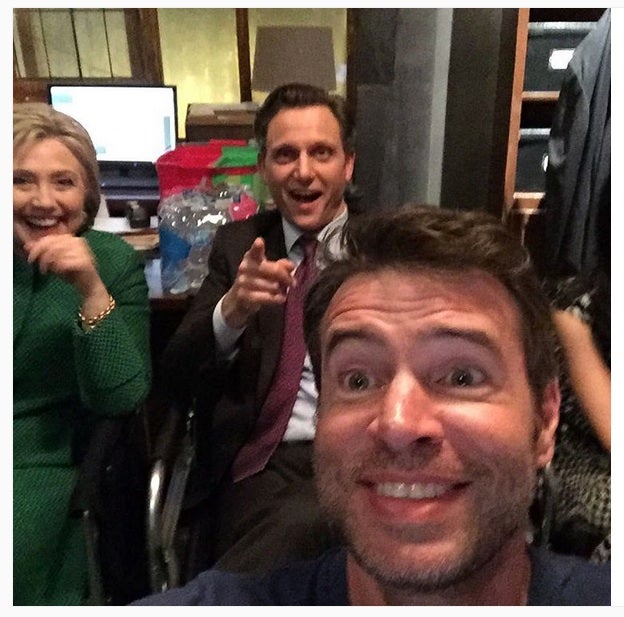 “Scandal” star Kerry Washington and creator Shonda Rhimes are among Clinton’s biggest Hollywood supporters. Rhimes has signed on to the candidate’s #ImWithHer campaign.

At a fundraiser in Studio City on Monday, Clinton told supporters who paid $2,700 each to be there that a vote against Donald Trump is a vote for “security.”