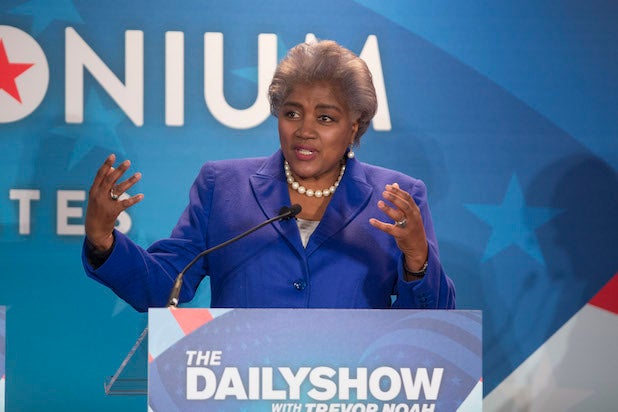 The latest batch of hacked emails released on WikiLeaks exposes that DNC head Donna Brazile provided Hillary Clinton at least one question in advance while she was a CNN contributor on the of a Democratic primary debate against Bernie Sanders hosted by the network.

The email sent by Brazile to Clinton chairman John Podesta and communications chief Jennifer Palmieri features the subject line “One of the questions directed to HRC tomorrow is from a woman with a rash.”

The body of the email said, “Her family has lead poison and she will ask what, if anything, will Hillary do as president to help the ppl of Flint.”

The email was sent on Mar. 5, the day before Clinton was asked the question during a CNN debate. A spokesperson for the network told TheWrap in a statement: “On October 14th, CNN accepted Donna Brazile’s resignation as a CNN contributor. (Her deal had previously been suspended in July when she became the interim head of the DNC.) CNN never gave Brazile access to any questions, prep material, attendee list, background information or meetings in advance of a town hall or debate.  We are completely uncomfortable with what we have learned about her interactions with the Clinton campaign while she was a CNN contributor.”

Brazile recently got into a heated conversation with Megyn Kelly when confronted by the Fox News host over a different email scandal in which Brazile was caught leaking town hall questions to the Clinton Campaign.

“As a Christian woman, I understand persecution. But I will not sit here and be persecuted because your information is totally false,” Brazile said while refusing to answer Kelly’s question.

The latest batch of Podesta emails disclosed by WikiLeaks also appears to show Brazile promising to send “a few more” questions in advance of a CNN town hall event.

Back in July, the Democratic National Committee was hacked and Wikileaks published thousands of damaging emails that exposed the committee’s bias toward Clinton over rival Bernie Sanders. The leaked emails led to the resignation of DNC chair Debbie Wasserman Schultz, who was accused of conspiring with party officials to thwart Sanders’ campaign. Brazile is serving as the DNC chair in Wasserman Schultz’s absence.