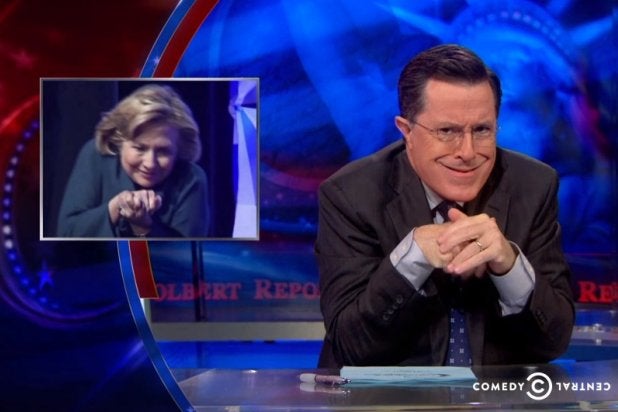 Stephen Colbert is used to the crowd chanting his name on “The Colbert Report,” so it was with utter dismay that he had to hear them chanting the name of his surprise guest, Hillary Clinton.

The former secretary of state appeared Tuesday night while Colbert was lambasting her memoir, “Hard Choices,” calling it little more than a name-dropping marathon.

The two then started dropping names left and right, trying to one up each other with who they know among the movers and shakers of the political and entertainment spheres. It was a veritable who’s who of everyone who matters, including Clinton’s husband, Bill.

We’re not sure how Colbert thought he could get her on that one, even if he did dedicate an entire episode of his show to interviewing the former president. She is married to him, after all.

Ultimately, Clinton got the upper hand by telling Colbert that he had to promote her memoir on the show, or she wouldn’t appear. He admitted that he couldn’t give up such a big name, even if it meant promoting something fundamentally opposed to everything he stands for as a fake conservative pundit.