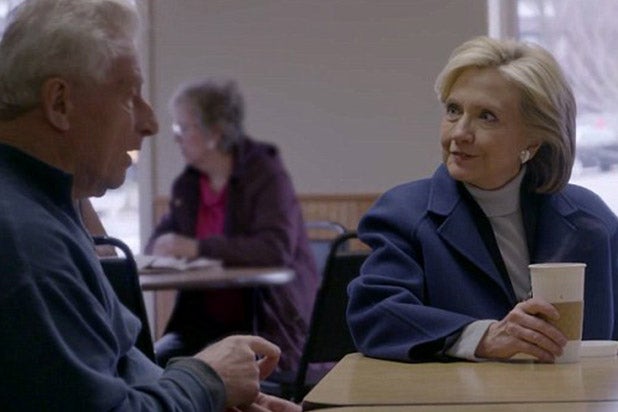 Among the first to congratulate the former first lady was her daughter Chelsea Clinton who tweeted, “Very proud of you Mom!”

Chelsea wasn’t the only familiar face throwing their support behind Clinton.

“Let the feisty debates begin! Everyone has a right to their opinion but apathy is for dickheads. #Hillary2016,” wrote “TRON:Legacy” actress on Twitter.

While singer-songwriter Moby offered a philosophical response, citing idealism and the tea party.

Elections are not the time for naive idealism when the alternative to #Hillary2016 will be a Koch backed tea party republican.

Let the feisty debates begin! Everyone has a right to their opinion but apathy is for dickheads. #Hillary2016

.@HillaryClinton will fight for the poor, middle class and embrace young people!

I have an announcement: I'm not running for president. Yay #Hillary2016 !

This is Hillary reading a text from me that says "with you every step of the way, gurl" #mypresident https://t.co/IpeklQIXzl

.@HillaryClinton announced she is running for president. Man, I did not see that coming.

.@hillaryclinton is smart, caring and determined. She is going to be an outstanding president! #Hillary2016

But not everyone welcomed the news of Clinton’s re-do. Among the less than enthusiastic — Oscar-winner Susan Sarandon, who recently told filmfestivals.com she is no Clinton fan. “I don’t vote with my vagina,” Sarandon said. “If Elizabeth Warren (US Senator, Mass.) came up, I would go that way. She (Hillary Clinton) lost me when she voted for the war without looking.”

A slew of Republicans also jumped on the Clinton bashing bandwagon, including presumptive presidential candidate Jeb Bush who tweeted: “We must do better than Hillary. If you’re committed to stopping her, add your name now.”

Below is a sampling of the #WhyImNotVotingForHillary hate.

Democrats calling me a uncle tom, So i'm acting white for not voting for your white candidate lol?? #Hillary2016 #WhyImNotVotingForHillary

Because her husband is one of the greatest serial offenders of women of my lifetime. #WarOnWomen #WhyImNotVotingForHillary

#WhyImNotVotingForHillary Benghazi. You're a criminal and we won't forget that @HillaryClinton

#WhyImNotVotingForHillary Because I have a brain and I use it.