Hillary Clinton and her daughter Chelsea are hitting the road in their new docuseries “Gutsy,” talking to inspiring women and trying bold new activities along the way. In the first trailer for the series, we see the former women of the White House rappelling over waterfalls, putting out fires — and bowling with Wanda Sykes.

According to Apple TV+, the series “shows Hillary and Chelsea as you’ve never seen them before, revealing their special mother-daughter bond and the unique, multi-generational way they approach the important and timely issues highlighted in each episode.” Those issues are raised as part of “a thought-provoking journey to speak with pioneering women artists, activists, community leaders and everyday heroes who show us what it truly means to be gutsy.”

We see a few of those famous faces in the footage, including Kate Hudson and her mom Goldie Hawn, Kim Kardashian and more. But, the series isn’t limited to actors. Megan Thee Stallion and Jane Goodall pop up in the trailer, along with the promise of women including Abby Wambach, Glennon Doyle and Gloria Steinem. 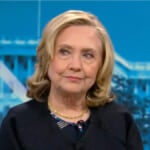 You can watch the full trailer for “Gutsy” in the video above.

The series is based on the New York Times bestselling book, “The Book of Gutsy Women,” and is produced for Apple by HiddenLight Productions in association with Left/Right LLC. “Gutsy” is executive produced by Hillary Clinton and Chelsea Clinton, alongside Johnny Webb, Siobhan Sinnerton, Roma Khanna, Ken Druckerman, Banks Tarver and Anna Chai, who also serves as showrunner.

The eight-episode series premieres on Apple TV+ on September 9, 2022.