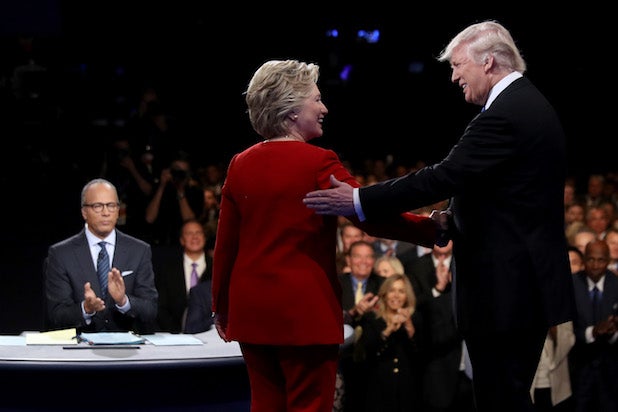 Donald Trump and Hillary Clinton finally squared off in a debate on Monday night at Hofstra University, and Twitter seems to think that Clinton was victorious.

Pundits were quick to point out that Clinton appeared healthy, which should quiet rumors of not being fit to serve as president. The debate, moderated by NBC’s Lester Holt, was the first of three before the presidential election.

Trump was fact-checked numerous times by various media organizations throughout the 90-minute event, specifically being called out for claiming Clinton has fought ISIS her entire life and denying that he once said China started global warming.

“There was only one future President on that stage tonight and her name is Hillary,” one person tweeted. Another viewers wrote, “SAD performance by Trump. By performance I mean when he showed up and was himself. Hillary made history and made us proud.”

Another user felt strongly that Clinton dominated, tweeting, “She murdered him and torched the body.”

Neither candidate did anything too outlandish and the second debate should be another highly anticipated event. While most voters probably feel that whomever they liked prior to the debate was victorious, Twitter seems to feel that Clinton came out on top.

Tonight voters saw there is only one candidate who's prepared to be Commander-in-Chief. Her name is @HillaryClinton. #debatenight

There was only one future President on that stage tonight and her name is Hillary! #debatenight

"I haven't given lots of thoughts to NATO." Exactly what you want a presidential nominee to say.

Trump's leaving way too much on the table. This is surprising. He's had ample chances to hit her, and didn't. #debatenight

Hillary won. Trump's a disaster and a terrible mess and it was fully on display. Hillary is going to Keep America Great. #debatenight

She murdered him and torched the body. #debatenight

SAD performance by Trump. By performance I mean when he showed up and was himself. Hillary made history and made us proud. #debatenight

#debatenight – @HillaryClinton rope a doped @realDonaldTrump = proving, always do what Ali won with