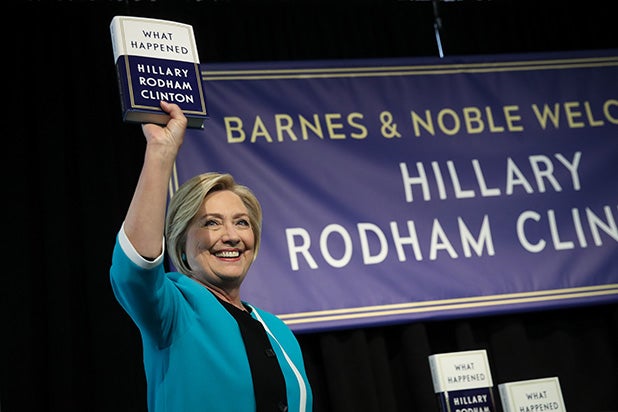 Hillary Clinton’s campaign memoir “What Happened” has sold more than 300,000 copies across all formats in its first week, moving more hardcover copies than any nonfiction book in five years.

According to the Associated Press, Clinton’s reflection on her loss to Donald Trump in the 2016 presidential election moved 168,000 hardcover copies in its first week. The last nonfiction book to do better was 2012’s “No Easy Day,” a memoir by one of the former Navy SEAL Team members responsible for the death of Osama bin Ladin, which sold more than 250,000 copies in its first week.

Clinton’s publisher Simon & Schuster also told the AP that the book set a company record for most e-book and audio sales.

“The remarkable response to ‘What Happened’ indicates that, notwithstanding all that has been written and discussed over the last year, there is clearly an overwhelming desire among readers to learn about and experience, from Hillary Clinton’s singular perspective, the historic events of the 2016 election,” Simon & Schuster CEO Carolyn Reidy said in a statement to the AP. “In its candor and immediacy, ‘What Happened’ is satisfying that demand.”

Clinton’s last book “Hard Choices,” the 2014 memoir reflecting on her time as Secretary of State in the Obama administration, sold just 100,000 copies. Her 2003 book “Living History,” which included her first statements regarding her husband’s scandals while in the White House,” came at a time when the hardcover book market was much bigger and sold more than 600,000 copies.

Last week, Amazon deleted hundreds of negative reviews of “What Happened” from its listing of the book after the publisher questioned their authenticity. The book had 50 percent one-star and 45 percent five-star reviews with a 3.2-star rating before the suspicious reviews were deleted. The rating since went up and now stands at 4.8.