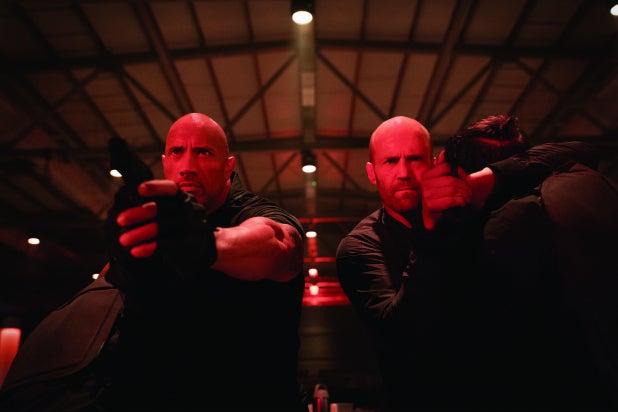 You’ve got to appreciate a movie that doesn’t take itself seriously. And, man, “Fast & Furious Presents: Hobbs & Shaw” is definitely about as ridiculous as a movie can be, for better or worse.

There is no confusing exactly what this film thinks of itself within the first few moments, like when Idris Elba’s Brixon introduces himself as, “I’m the bad guy.” He doesn’t really need a name because, as with most villains in your average action movie, he’s just the guy you’re supposed to hate right away. So why waste time with formalities — or character development, for that matter?

When we meet the brawny tough guy, he’s in the midst of cracking heads and tearing apart limbs because he desperately needs a virus to annihilate the planet by a certain deadline — classic action movie bad guy ambition. You’re probably asking, but wouldn’t that mean he would die too? Nope, because this villain is mechanically enhanced. So he’s, like, part human but mostly robot.

In other words, he’s a formidable nightmare that is curiously humanized when director David Leitch (“Deadpool 2,” “Atomic Blonde”) randomly pans his camera to Elba’s rear end any time the villain is about to give one of his ominous speeches. This never makes sense, but in a genre that usually sexualizes female characters, it is refreshing to see it gender flipped, and by a male filmmaker no less.

“Hobbs & Shaw” is full of gratuitous action and male eye candy, especially with its title characters played respectively by Dwayne Johnson  and Jason Statham, leftover “Fast & Furious” meathead mercenaries and rivals hired to snuff out Brixton. The addition of Shaw’s sister Hattie (Vanessa Kirby, “The Crown”) complicates things when it’s revealed that she actually has the virus inside her, which means the trio has to race against the clock before she self-destructs.

As in any “Fast & Furious” film, it’s nice to see that Hattie isn’t the typical damsel in distress, but rather an elusive weaponized agent of sorts who certainly knows how to hold her own in a fight — even when it’s against Hobbs, who’s probably triple her size, but hey.

Though the ticking-clock drama is what propels the characters, screenwriters Drew Pearce (“Iron Man 3”) and Chris Morgan (“The Fate of the Furious”) pretty much rest the entire film on Hobbs and Shaw’s personality and professional clashes as the pair incessantly trade disses. It’s pretty basic. In fact, at one point Hobbs drops something like a “yo’ mama” line, which should give you a sense of the film’s elementary formula.

But again, “Hobbs & Shaw” is very cognizant of what it is, which is also in line with what “Fast & Furious” has always been: an opportunity for alpha men (and women) to exchange insults then eventually hug it out for the sake of some good old-fashioned whoop-ass. The action scenes are where “Hobbs & Shaw” truly excels, like when Brixton is in a high-speed chase on a motorcycle after Hobbs and Shaw in the middle of a crowded street (which all law enforcement has apparently abandoned), and he somehow manages to diagonally snake underneath a gigantic truck without even a scratch. It’s totally a “Mission: Impossible” Tom Cruise move, mixed with some of Christian Bale’s Batmobile tricks in “The Dark Knight.” Which is to say, completely unbelievable, but within the context of this bonkers film, it works.

Credit goes to supervising stunt coordinator Chris O’Hara (“Venom”), who deftly concocts visually impressive scenes, including the incredibly over-the-top penultimate moment that entails Hobbs pulling a helicopter down from the sky with only his arm weight and a chain while dangling on a truck linked to five other cars. It’s ridiculous, but A+ for creativity.

Kudos to O’Hara for also crafting the moment that precedes the helicopter lasso, set in Johnson’s native Samoa, where Hobbs’ family — including estranged brother Jonah (Cliff Curtis) — assembles for an old-school battle against Brixton’s army. Morgan and Pearce surprisingly weave a spectacular fight sequence with zero guns, in honor of the Samoan tradition. Though the main trio comes up with the idea of rigging the system to turn off Brixton and his team’s powered guns, I guess we’re supposed to not ask why they didn’t think to maybe find Brixon’s off switch, which seems like a more pressing decision.

Though “Hobbs & Shaw” doesn’t really bother with things like common sense or credibility, it earns points for highlighting Samoa, amplified by Jonathan Sela’s (“Transformers: The Last Knight”) glorious cinematography, in a major action film led by a Samoan actor. It gets a bit hokey with the subplot about Hobbs and his brother’s troubled relationship and eventual rekindling — not to mention the flirty chemistry between Hattie and Hobbs (which thankfully doesn’t take off) — but it’s a nice callback to the subtle sentimentality of early “Fast & Furious” films.

“Hobbs & Shaw” generally doesn’t reinvent any wheels in the franchise. (It’s not even necessary that you’ve seen “Fast & Furious 6,” though there are a few minor references at the end of this film.) But it does underscore the undeniable chemistry between bonafide action figures Johnson and Statham in a film that doesn’t try to be anything more than a frivolous blockbuster, but with heart.