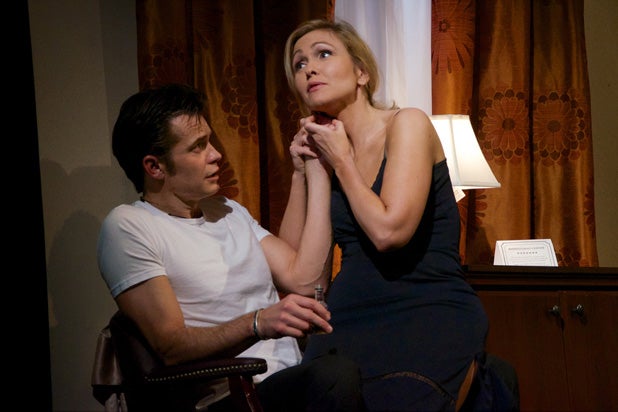 What a difference an hour and 10 minutes make. Kenneth Lonergan has written a terrific new comedy titled “Hold on to Me Darling,” which opened Monday at the Atlantic Theater, and it runs about two hours and 40 minutes.

Whoa! In the current theater world, that’s a “Gotterdammerung”-size play. Anyone who goes to the theater regularly these days knows the experience. Ushers announce that the play is 90 minutes with no intermission, and there’s an immediate sigh of relief from the crowd. In my opinion, do you know what’s even better than a 90-minute play? Staying home and watching cable TV, that’s what.

“Hold on to Me Darling” is great, fun theater because 1) Lonergan has real talent, and 2) he takes that extra hour-plus to develop not only a truly inspired principal character with the delicious name Strings McCrane but surrounds him with five other characters, each of whom exudes enough backstory to spawn five other plays.

You will immediately know Strings McCrane, played to perfection by Timothy Olyphant. You’ve either worked with him or interviewed him. Maybe you are him. Strings is a country star who has crossed over to the movies, where he has made it big playing comic-book heroes. He’s pampered, insulated, obscenely rich, self-obsessed, hounded by the paparazzi, and his beloved mama in Tennessee has just passed away.

When we first meet Strings, he’s in the process of smashing another priceless guitar because, dammit, his life is just so hard and thankless. No problem. His loyal assistant, Jimmy (Keith Nobbs in another pitch-perfect performance), has a spare top-of-the-line guitar ready to go.

Jimmy, as written by Lonergan and played by Nobbs, could be a whole other play. He’s the Uriah Heep of the modern-day entertainment world, and anyone who has worked or covered the biz knows this guy. He’s the shadow who knows more about the star’s life and resume than the star himself. He might be homosexual, but the creepy thing is that he’s probably not. Lust would at least explain his groveling devotion.

To calm Strings’ many frustrations, Jimmy orders up a hotel masseuse, and so enters Nancy (Jenn Lyon), who is destined to run through the categories of one-night stand, girlfriend, fiancée, wife, and ex-wife faster than Strings’ country twang allows him to finish one of his endless sentences.

Without giving away too much of the story, let’s just say Strings’ family and relatives are played by a superb ensemble that includes C. J. Wilson, Adelaide Clemens, and Jonathan Hogan. What their life in the star’s shadow has been like looms large in every scene they share with Olyphant. In so many 90-minute plays, they would be reduced to mere types who show us a single facet of the lead character’s personality. Here, Lonergan’s supporting characters are filled with many facets of their own.

“Hold on to Me Darling” doesn’t ramble so much as it takes its time, and director Neil Pepe keeps all the comic moments percolating, one on top of the other.  The minor miracle at the end is that after laughing at Strings’ many indulgences, Lonergan gives us a glimpse beyond the spoiled country boy. Suddenly, it’s almost sad in Johnny Cash sort of way.