Louis Sachar got a lot of calls from Hollywood after his book “Holes,” which turns 20 years old this June, won the Newbery Book Award and the National Book Award for Young People’s Literature.

But Sachar was so choosey about who he’d sell the book’s film rights to that it took five years before “Holes” the movie, starring Sigourney Weaver, Jon Voight and a young Shia LaBeouf, hit the big screen. Now as the film likewise celebrates its 15th anniversary this month, Sachar is thrilled it’s his book, as well the movie, that is still remembered.

“That was one of my concerns actually when I first decided to make the movie. I hope it doesn’t keep people from reading the book, that it just becomes a movie now,” the author told TheWrap. “I’m now hearing from kids who are reading the book in school and are just now realizing there was a movie made before they were born, which is amazing to me. The movie is 15 years old, and these kids are 10, 12 years old reading it. So the movie is ancient history to them.”

“Holes” is about Stanley Yelnats, a kid with rotten luck who winds up in a correctional camp for boys for a crime he didn’t commit. Stanley and his fellow “campers” are forced to dig a five-foot deep hole every day in order to “build character,” but Stanley comes to suspect that it’s just a ruse for the camp’s warden to find something buried on the grounds.

Sachar explained that though it’s a grim subject, he was inspired to write a “fun story” and “grand adventure” in the vein of William Goldman’s “The Princess Bride.” So it was important to him to work with a producer and director like Andrew Davis (“The Fugitive”) who could bring to the project a strong cast and would take the book seriously.

“I didn’t want ‘Holes’ being turned into some soft, fluffy film,” Sachar said. “I liked the idea that it would be a director coming from making tough, gritty films making it.” 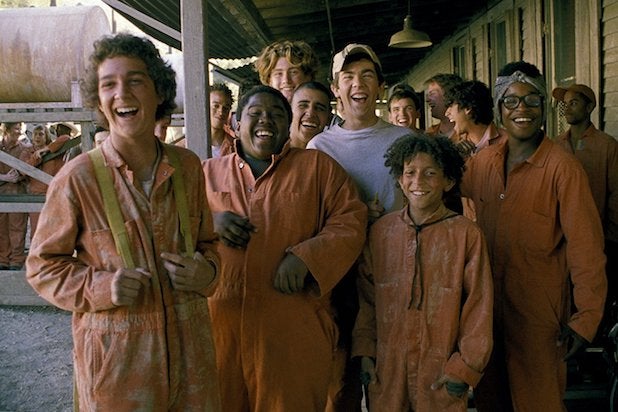 Sachar made his screenwriting debut on the film, guiding some of Davis’s choices to limit the amount of voiceover narration and preserve the story’s mythical flashbacks.

“I was surprised that he asked me to write the screenplay. My first reaction was, ‘no, get someone who knows what they’re doing,” Sachar said. “Even though I wrote it, and I was there, I never like movies of books that I like. So I was surprised how well the movie came out.”

Sachar remembers liking the film so much, he would sit through screenings of the film where he and Davis toured it for teachers across the country ahead of its release. Now 15 years removed from those screenings, he’s hearing from teachers who read the book and saw the film as kids, grew up to become teachers and are showing “Holes” to their own students.

“People had the sense this was something special,” Sachar said. “Certainly that was the case on the set. I was constantly being told by people on the crew, it’s not always like this. Everything felt like family, and there wasn’t a whole lot of ego involved. Everyone was just trying to make a good movie.”