The five-day Thanksgiving-holiday box office will end on a high note, up 17 percent over 2008, according to one studio’s estimate, with Summit’s "Twilight" sequel "New Moon" greatly diminished but still landing in the top spot, and other incumbents — including Warner’s "Blind Side" and "Disney’s A Christmas Carol" — spiking significantly from last week. 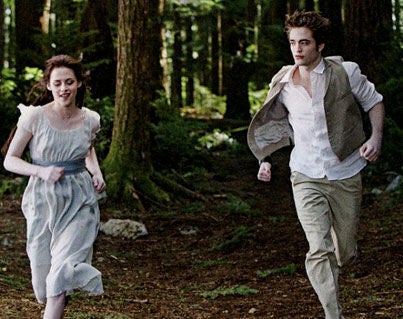 While the same films that drove the box office to record heights last weekend accounted for the bulk of holiday ticket sales, new entries did their part, as well. Disney’s PG "Old Dogs" ($24.1 million) and Warner’s Wachowski-produced actioner "Ninja Assassin" ($21 million) finished respectably in the middle of the pack.

Rounding out the top 10: "The Fantastic Mr. Fox," "Precious" and "The Men Who Stare at Goats." Landing at number 11, the Weinstein Company’s awards hopeful, the Cormac McCarthy-adapted "The Road," which brought in $2 million in a 111-venue limited run.

For its part, "New Moon" saw its weekend tally drop about 70 percent from last week’s opening — the third best premiere ever. But it still had enough lift to lead the box-office with $66 million over the five-day period. The film has grossed $230.7 million domestically thus far.

"Blind Side," meanwhile, surged 18 percent from its premiere weekend, finishing second overall over the five days with $57.8 million and driving its two-week cumulative total to $100.2 million. 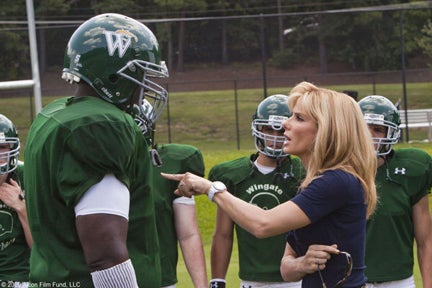 Other strong finishers included Sony Roland Emmerich film "2012," which added $25.6 million to its domestic coffers and now has a worldwide total of $594.5 million

After a massive premiere that produced the third biggest three-day opening ever, Summit Entertainment’s "Twilight Saga: New Moon" is slowing down a bit.

Meanwhile, after premiering to one of the 14 best CinemaScore marks of all time, Warner’s "The Blind Side" is gaining momentum.

The result was a rather contested day-after-Thanksgiving box office, traditionally huge for movie-going, with the "Twilight" sequel narrowly edging out "Blind Side" by a margin of $17.9 million vs. $16.2 million.

For "Blind Side," directed by sports-movie specialist John Lee Hancock ("The Rookie") and starring Sandra Bullock, the Friday performance represented a 47 percent spike from its premiere a week prior. The film is pacing to finish the five-day Thanksgiving holiday with more than $58 million, which would push its cumulative two-week total past the $100 million mark.

"New Moon," meanwhile, experienced a sharp 76 percent drop from its previous Friday, when it enjoyed the best single-day box-office opening ever. The film is on pace for a five-day holiday gross of about $66.5 million, slightly less than the $70 projected earlier but still enough to lead the overall market. Even better for Summit, it has now grossed more than $200 million domestically after less than two weeks in theaters.

Incumbents continued to dominate the box office Friday, with "Disney’s A Christmas Carol" picking up steam in the same way an earlier Robert Zemeckis computer-animated holiday film, "The Polar Express," did five years ago.

The 3D Charles Dickens adaptation took in $6.7 million Friday — a 118 percent week-over-week spike — and is projected to finish the five-day holiday weekend with about $24 million. That would push the $200 million movie’s four-week total to over $106 million, with still about three weeks of 3D play left before James Cameron’s "Avatar" arrives to take its screens away.

Also sustaining itself well, Sony Roland Emmerich flick "2012" dropped only 14 percent week to week Friday, taking in another $7 million and putting itself on pace for a five-day gross of about $25 million. The film’s overall three-week domestic gross will approach the $140 million mark by the end of the weekend, with foreign totals far eclipsing even that.

In fact, in Russia, "2012" set an all-time box-office record for a foreign film by surpassing the $30 million mark.

Suffering from really bad reviews — it doesn’t get much lower than 7 percent score on Rotten Tomatoes, for example — "Old Dogs" took in $6.8 million Friday. The film, which stars Robin Williams and John Travolta, and was produced for a reported price of $35 million, will still finish the weekend in decent financial shape at around $24 million.

"Ninja Assassin," meanwhile, took in $5.6 million Friday and is tracking toward a five-day opening total of about $22 million. Shot for around $40 million, the film was produced by the "Matrix" teaming of the Wachowski Bros. and Joel Silver, with veteran Wachowski-film AD James McTeigue directing. Legendary Pictures and Warner also share production credits.

Rounding out the top 10 were a quartet of specialty titles looking to garner Oscar attention.

Standing pat in 663 locations amid intense competition at multiplexes for screens, Lionsgate’s "Precious: Based on the Novel ‘Push’ By Sapphire," experienced its first week-to-week drop Friday (23 percent), with the film taking in $2.8 million — a blow for a campaign that hoped to sustain growing box-office momentum through Oscar season.

And opening in 111 North American locations, The Weinstein Company’s "The Road," the latest adaption of novelist Cormac McCarthy ("No Country for Old Men"), finished solidly at No. 11 Friday, taking in $560,000. 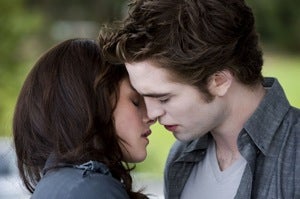 Summit’s “New Moon” is still expected to win the holiday box-office race, with the film taking in about $23.4 million since the five-day accounting period started Wednesday.

“New Moon” is forecast to finish at about $70 million this weekend, which would bring its two-week domestic total to $236.2 million.

Starring Sandra Bullock and Kathy Bates, “Blind Side” is expected to complete the five-day period at around $60 million, with its audience projected to grow more than 25 percent week-to-week from Friday through Sunday.

Meanwhile, also experiencing a ticket-selling spike on Thanksgiving, “Disney’s A Christmas Carol” is now on pace to finish the five-day holiday period in third or fourth place with over $26 million in receipts.

In fact, the 3D Robert Zemeckis film’s expected three-day weekend total is projected to be about 62 percent higher than its $12.2 million haul last weekend — a growth phenomena similar to what Zemeckis’ “Polar Express” experienced five years ago.

If those forecasts hold true, the latest Charles Dickens adaptation — in 3D at a cost of around $200 million — will have grossed about $109 million domestically after four weeks of release, with about three more weeks of 3D play left in it before “Avatar” arrives and takes its screens away. Disney also has the bulk of its foreign receipts still pending for the picture. 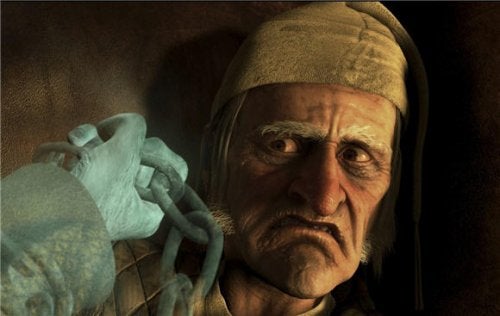 The performance of the aforementioned box-office incumbents — a class that also includes Sony’s Roland Emmerich disaster movie “2012,” which is expected to complete the five-day holiday with around $25 million — has made business difficult for several new entries.

Disney live-action family release “Old Dogs,” for example, is in the strange position of competing with the also-PG-rated “Christmas Carol.”

Taking $7.4 million in its first two days, “Old Dogs” — which stars Robin Williams and John Travolta and has received awful reviews — is being projected to finish the weekend with about the same total as “Christmas Carol” ($26 million), which is in its fourth week of release.

Meanwhile, trying to counterprogram against the glut of family-targeted entries, Warner’s “Ninja Assassin” — a $40 million action movie produced by the “Matrix” team of Joel Silver and the Wachowski Bros. — made $7.8 million over its first two days. The film’s five-day projection currently stands at around $25 million.

With the domestic box-office flooded with big-tent, wide-release offerings, a few studios tried to establish awards-season presences for niche films.

Fox Searchlight, for example, expanded its Wes Anderson-directed animated movie “The Fantastic Mr. Fox” to 2,033. So far, results have gone as expected, with the film on track for a five-day gross of about $10.5 million.

Also, The Weinstein Company’s limited release of Cormac McCarthy adaptation “The Road” is potentially looking to hit the $2 million mark in its first five days playing at only 111 North American venues.