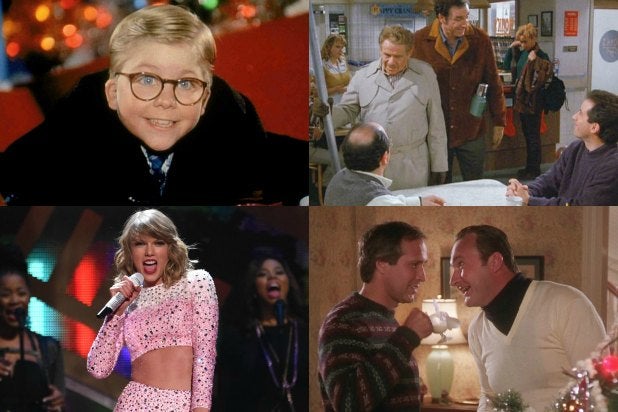 ‘Tis the season for prolonged holiday television viewing and this year, the channel guide is packed with shows, movies and Christmas specials every day leading up to December 25th.

Networks have already begun airing their holiday-themed episodes but the casts of “2 Broke Girls,” “Mike & Molly,” “Mulaney,” and “Two and a Half Men” are still due to provide some seasonal fun over the next 11 days.

Fans will also be gifted with some classic Christmas movies — from “Elf” to “A Christmas Story” and “Miracle of 34th Street,” both the 1947 and 1994 versions. “A Charlie Brown Christmas” is also back with Linus’ true meaning of Christmas and the quintessential music of the Vince Guaraldi Trio.

Should you be in the mood for programming a little less cheery, tune in to Syfy for the channel’s original movie “Christmas Icetastrophe,” which promises to be sort of like “Frozen” — only with way more death.

TheWrap has assembled your complete holiday viewing guide, to help you navigate your way around the tube leading up to Christmas. Find everything you need to know (and watch) below.

“2 Broke Girls,” CBS
“And The Loan For Christmas” – Max, Sophie and the gang at the diner all dress up for a holiday decorating party, thrown by Sophie.
“2 Broke Girls” airs Monday, Dec. 15 at 8 p.m. ET

“The Sing-Off,” NBC
The a cappella singing competition is back for a special holiday music edition. Jewel, Patrick Stump of Fall Out Boy and Shawn Stockman of Boyz II Men return as judges, while Nick Lachey returns as host.
“The Sing-Off” airs Wednesday, Dec. 17 at 9 p.m. ET

“Hot in Cleveland,” TV Land
“Cold in Cleveland: The Christmas Episode” — Betty White is basically America’s grandmother so who better to spend the holidays with this year?
“Hot in Cleveland” airs Wednesday, Dec. 17 at 10 p.m. ET

“The Taste,” ABC
The remaining cooks compete in holiday-inspired challenges with ingredients such as fowl, duck and spiced chocolate desserts.
“The Taste” airs Thursday, Dec. 18 at 8 p.m. ET

“Two and a Half Men,” CBS
In the festive episode, “Clockwise In Back Hole Until Tight,” Walden and Alan are determined to convince Louis that Santa Claus is real.
“Two and a Half Men” airs Thursday, Dec. 18 at 9 p.m. ET

“Elf,” ABC Family
Will Ferrell stars as Buddy the Elf, who leaves the North Pole in search of his long-last dad.
“Elf” airs Friday, Dec. 19 at 8 p.m. ET

“Seinfeld,” TBS
No need to air any grievances here! Get out your aluminum poles for the classic “Festivus” episode.
“Seinfeld” airs Tuesday, Dec. 23 at 7:30 p.m. ET

“Christmas Vacation,” ABC Family
Chevy Chase stars as Clark Griswold, the dad who wanted everything to be perfect for Christmas, only to have the exact opposite happen.
“Christmas Vacation” airs Wednesday, Dec. 24 at 7 p.m. ET

“A Christmas Story,” TBS, TNT
The marathon continues this year as both cable channels will air the classic holiday tale about a boy who wanted a Red Ryder BB gun.
“A Christmas Story” airs Wednesday, Dec. 24 at 8 p.m. ET

“Doctor Who,” BBC America
“Last Christmas” — The 10th Christmas special since the British series was revived in 2005 will include a visit to Santa at the North Pole.
“Doctor Who” airs Thursday, Dec. 25 at 9 p.m. ET