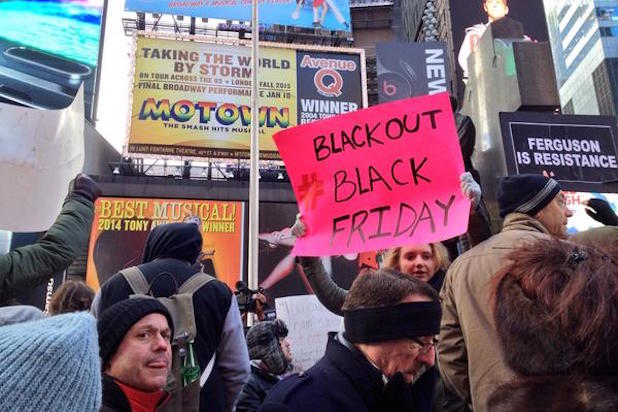 #BlackOutBlackFriday protests are leaving their mark on social media and in cities across the nation.

The campaign fueled by anger over Monday’s decision in Ferguson, Missouri not to indict police officer Darren Wilson for the shooting death of 18-year-old Michael Brown was supported by a multitude of celebrities, including “Fruitvale Station” director Ryan Coogler and the movie’s star Michael B. Jordan along with Kat Graham (“The Vampire Diaries”), Ava DuVernay (“Selma”), Bevy Smith (“The Fashion Queens”) and Jesse Williams (“Grey’s Anatomy”).

Its goal was to boycott retail businesses on Friday after Thanksgiving, traditionally referred to as Black Friday, the biggest retail shopping day of the year.

The activity on social media has kept #BlackOutBlackFriday in Twitter’s Top 10 trending topics for several hours on Friday.

In addition to boycotting businesses, the protest has also spilled out into the streets. In Oakland, for example, #BlackOutBlackFriday supporters shut down the area’s commuter train, BART. In Dayton, Ohio, a group of protestors stopped traffic when it convened on the street for a march. And in St. Louis, Missouri, protestors shut down a local mall with a mass “die-in.”

Not all instances of the #BlackOutBlackFriday tweets were necessarily about boycotting purchases. Some hijacked the tag to promote their products. Others implored shoppers to give a pass to black-owned businesses.

DuVernay, director of the upcoming drama “Selma” about the civil rights movement, told TheWrap on Friday that the boycott idea was conceived by Coogler.

“Ferguson is a mirror of the past,” she said. “And S‎elma is a mirror of now. We are in a sad, distorted continuum. It’s time to really look in that mirror.”

Here’s a selection of tweets about Friday’s protests:

RT @popcornreel: I'm with Ryan Coogler, @AVAETC, @iJesseWilliams and many others for #BlackoutBlackFriday. Not. One. Red. Cent. Today.