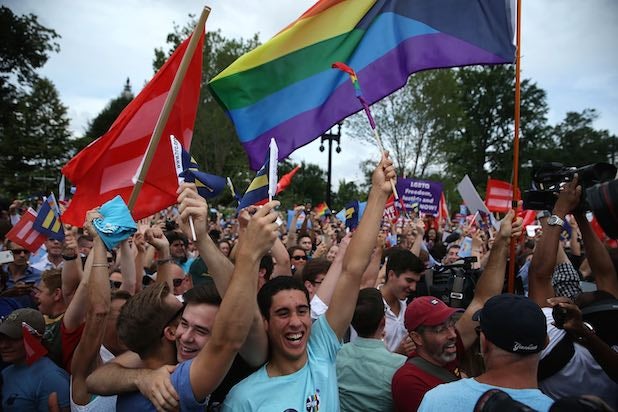 The Supreme Court of the United States ruled on Friday that same-sex marriage is a constitutional right for every American, regardless of what state they live in, and people have taken to social media to share in the love.

“Oh Happy Day!” former “Star Trek” star George Takei, a well-known LGBT activist, wrote on Facebook. “The Supreme Court has ruled 5-4 that marriage equality is the law of the United States. Yes, ALL of these United States. I have waited decades for this day, and my heart is full of joy and my eyes wet with tears. Let the celebrations begin, and may the happy couples live long and prosper together.”

Take a look below at more reactions from Hollywood stars across film, TV and music.

SUPREME COURT RULES FOR MARRIAGE EQUALITY!!! Fourteenth Amendment requires a state to license a marriage between two people of the same sex.

#SameSexMarriage upheld by Supreme Court. It’s the law of the land. Who wants to marry me? – Don Lemon (@donlemon) June 26, 2015

Today is a big step in our march toward equality. Gay and lesbian couples now have the right to marry, just like anyone else. #LoveWins

How far we’ve come since the Pres Obama & Sen. Clinton ran against gay marriage in 2008! People can change. Never give up. #SCOTUSMarriage – Michael Moore (@MMFlint) June 26, 2015

I married in the sun against the stone of buildings built before you and I were born. #SCOTUSMarriage #hugeday #equality #love

Huge day for America.. Happy to see the news. All the love

I LOVE THIS COUNTRY #MarriageEquaility

“In forming a marital union, two people become something greater than they once were. It is so ordered.” #SCOTUS xoxo pic.twitter.com/ZT5tl8uMTo

Holy shit SCOTUS!! What an amazing day and what a great step forward for America

#MarriageEquality for all. In honor of this historic event, here’s a celebratory video from @ScottIcenogle & me. https://t.co/P5pcm2KNAe

“You have to love all of us.” #OrphanBlack #LoveWins pic.twitter.com/99hIYqqOp2

Love conquers all. Thanks to all who helped fight for this victory. x <3 <3 <3 <3 x #MarriageEquaility #LoveWins