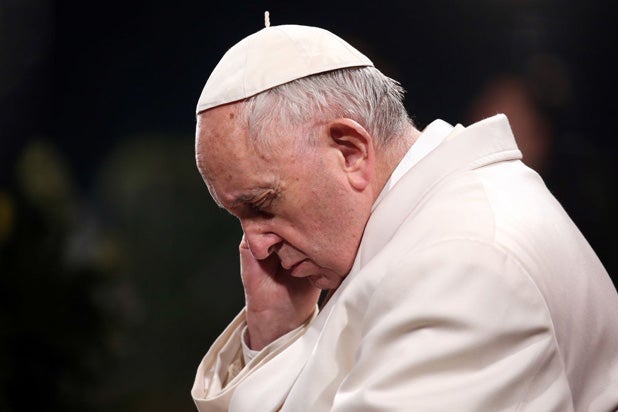 Pope Francis has called an unprecedented “summit” of bishops to the Vatican to discuss for the umpteenth time the problem of sexual abuse by priests — this one is focused on the abuse of children. The summit starts Feb. 21 and ends on the night of the Academy Awards, Feb. 24.

I cannot help but see the significance between the revelations about abuse and power in the Roman Catholic Church mirroring the revelations of abuse and power in our community out here in Hollywood. Clergy sex-abuse survivors have been coming together and speaking out since 1988 through SNAP, the Survivors Network of those Abused by Priests. In 2002, the group helped the Boston Globe investigative team expose the Boston diocese’s practice of covering up for predators and moving them to new, unsuspecting parishes. Hollywood immortalized that moment in the 2016 Oscar-winning movie “Spotlight.”

In Hollywood, the silence breakers of 2017 had their own “Spotlight” moment. They gave a new and different focus to the issue covering up and ignoring sexual abuse in our society, and the #MeToo movement gained serious momentum.

Whether simply a coincidence or the result of the burgeoning #MeToo movement, this past year a Pennsylvania grand jury exposed more than 300 “predator priests” in just six dioceses in that state and found more than a 1,000 victims. Since the report was released, more survivors have come forward and more clergy have been exposed.

Investigative reporters in Boston and Philadelphia determined that as many as one in three American bishops have failed to respond appropriately to cases of sexual abuse. The attorney general of Illinois revealed that close to 75 percent of allegations reported to the Catholic Church in that state were either minimized or never even investigated in the first place. The FBI observed in the Pennsylvania report that the Church had what was akin to “a playbook” for concealing and covering up the truth.

Last year, when I spoke out about two-time Oscar-nominated director Franco Zeffirelli abusing me in 1993 I didn’t understand he was using the same playbook. [Editors note: Zeffirelli’s son, Pippo, has denied that his father, now 96, verbally or sexually abused Schaech on the set of the 1993 movie “Sparrow” and called the actor’s accusations “not credible.”]

“Molestation suggests violence, and there was no violence at all,” Zeffirelli wrote. Zeffirelli doesn’t consider himself part of the flock; he feels integrated into the very culture and power of the Catholic hierarchy. In Zeffirelli’s youth, Pope Paul VI was instrumental in developing Zeffirelli’s aspirations of being an artist, and later in life even helped him launched his movie career.

In 2016, Pope Francis hosted Zeffirelli in the Vatican. Franco’s abuse by a priest happened nearly 80 years before Francis became pope, but it’s clear that nothing has changed within the culture in the intervening time. The Church hierarchy spends millions on lobbyists and lawyers who fight to keep justice from all survivors by opposing needed judicial reform.

It’s even much simpler than any lawyer I’ve talked to can put it.

The Vatican’s endless wealth and its “playbook” is directed to silence victims, deny them rights or the church will go out of business.

Recently, Pope Francis acknowledged that the church had faced a persistent problem of sexual abuse of nuns by priests and even bishops. Members of his flock have told me that it’s not fair to say #TimesUp to Pope Francis because he doesn’t have the power to get rid of the “old-boys-club network” and give women positions of power within the church.

I have been told that this pope is the nicest one when it comes to the LGBTQ community, but it’s very clear that factions within his powerful hierarchy don’t want to address their internal issues, preferring to blur the lines and blame homosexuality for what is clearly child abuse. Why else would Bishop Robert Cunningham, leader of the diocese in Syracuse, N.Y., testify that the child victims were partly to blame in priest sex-abuse cases?

It may be beyond the power of Pope Francis to simply protect the next generation of children at the summit meeting this month — but it would be great if someone on the Academy stage told him to do just that.

I believe the collective courage of our industry is way stronger than that of the church, but we still have ways to grow. It’s essential for the industry to embrace those brave individuals who’ve spoken out, and incorporate their learnings for the future generations of storytellers.

It’s a Hollywood tradition to write a new ending. That’s precisely what I did when I spoke out. I’m writing a new ending for the people I’m meant to serve and support and for the culture I’ve been embedded in for the last 30 years.

View In Gallery
BIO Johnathon Schaech
Johnathon Schaech is an award-winning actor and activist who, over the last 30 years, has starred in over 160 Hollywood productions. Working opposite some of the most acclaimed artists in the industry, Schaech credits include Showtime's "Ray Donovan," DC's "Legends of Tomorrow" and "That Thing You Do!" Recently, he's been working with the SNAP network (Survivors Network of those Abused by Priests), ECA (Ending Clergy Abuse-Global Justice Project) and #MeToo to end clergy abuse. Johnathon is working with Harvard-accredited NoticeAbility.org, a nonprofit dedicated to helping students with brain-based differences identify their unique strengths and build their self esteem.

Johnathon Schaech is an award-winning actor and activist who, over the last 30 years, has starred in over 160 Hollywood productions. Working opposite some of the most acclaimed artists in the industry, Schaech credits include Showtime's "Ray Donovan," DC's "Legends of Tomorrow" and "That Thing You Do!" Recently, he's been working with the SNAP network (Survivors Network of those Abused by Priests), ECA (Ending Clergy Abuse-Global Justice Project) and #MeToo to end clergy abuse. Johnathon is working with Harvard-accredited NoticeAbility.org, a nonprofit dedicated to helping students with brain-based differences identify their unique strengths and build their self esteem.