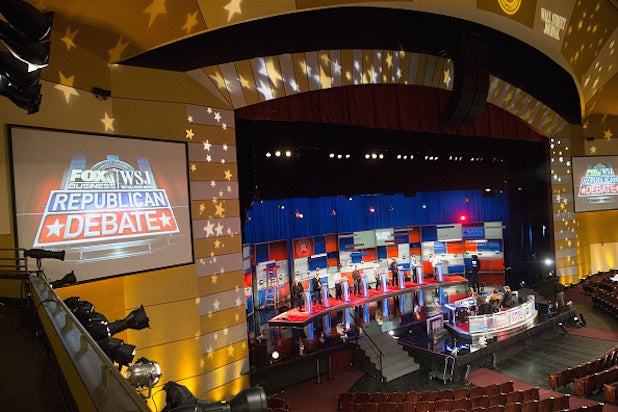 Hollywood conservatives say they’re anxious to cut down the unprecedented number of GOP candidates running for the party’s nomination. They’re crossing their fingers and hoping that Tuesday’s primetime Republican debate in Milwaukee will whittle down the overcrowded field.

“They’re all great candidates,” said writer and producer John Sullivan. “But I do think it’s a little too broad. There’s a whole group that kind of needs to be dropped.”

Hosted by Fox Business Network and the Wall Street Journal, Tuesday’s debate will be the first this season to only feature eight top-tier candidates, instead of the usual ten. This after both New Jersey Gov. Chris Christie and former Arkansas Gov. Mike Huckabee were relegated to the so-called “kids table” after failing to secure the 2.5 percent minimum average in recent national polls, set by Fox Business. Christie and Huckabee will be joined by Louisiana Gov. Bobby Jindal and former Pennsylvania Sen. Rick Santorum. South Carolina Sen. Lindsey Graham and former New York Gov. George Pataki are out of the debate, after failing to hit the 1 percent mark to participate in the so-called “undercard” face-off.

While 12 candidates is better than the previous 14, conservatives in Hollywood believe that’s still too many.

Adding to their frustration is the fact that Democrats have settled on a much more modest group of three candidates, with most Hollywood liberals throwing their support and money behind party frontrunner Hillary Clinton. Meanwhile, Hollywood Republicans have yet to galvanize their troops and money behind one major candidate.

“It’s frustrating to me that someone who has 1-2 percent still thinks they have a shot at the presidency,” said one Hollywood soap actor who asked not to be named. “I think it’s time for [Jeb] Bush to say goodbye. Same goes for Huckabeee and [Ohio Governor John] Kasich. I think their egos are preventing them from backing out.”

Dave Berg, a former co-producer of “The Tonight Show with ” and a member of the leading Hollywood conservative group Friends of Abe, says he’s supporting Florida Sen. Marco Rubio. Berg believes the overcrowded GOP field is forcing many of the candidates to push the envelope further than they normally would just to get noticed, something that could potentially hurt the party’s brand in the long run. He says he expects the Fox Business debate to focus on substantive issues that could help voters pick their candidates.

“I’m hoping Fox will do what CNBC was supposed to do in the last debate.”

Like many Hollywood conservatives, Berg is more fiscally than socially conservative. The biggest issue driving his decision in the 2016 election cycle, he says, is the economy.

Another Hollywood conservative who wished to remain anonymous told TheWrap he’s supporting Ted Cruz because he believes the Texas senator is “consistent.”

He too believes it’s time to cut down on the number of candidates.

“I really hope that the undercard candidates will finally come to terms with the fact that they should give up. Either that or find a reason for staying in the race.”