As news spread of the leaked Supreme Court opinion draft that all but confirms the encroaching peril for abortion rights in America, many people – especially women throughout Hollywood – expressed outrage, fear and angry scorn.

Politico published a leaked draft opinion, written by Samuel Alito, that in its current form overturns the 1973 Roe v. Wade decision that legalized abortion in America. But the opinion would not only overturn Wade and the 1992 Planned Parenthood v Casey decision. It also specifically compares those decisions to Lawrence v. Texas, the 2003 decision that overturned state laws banning same-sex relations, and 2015’s Obergefell v. Hodges, which legalized same sex marriage.

In other words, the decision is a clear warning that after abortion rights are ended, the Supreme Court is likely to turn its attention to same-sex marriages across America. 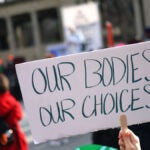 Rough stuff, which is why of course the online reaction, from the likes Roseanna Arquette, screenwriter Bess Kalb, commentator Roxanne Gay, and many more, has been proportionally rough.

Arquette dryly noted that “a slimy drunk rapist” – she was referring here to Supreme Court justice Bret Kavanaugh – “has taken away womens [sic] right to choose.”

“What do you say when nine people can dictate what happens to your body? It’s ridiculous and hateful. The court clearly wants to deepen the political crisis in this country and women will pay the price,” Gay wrote in part.