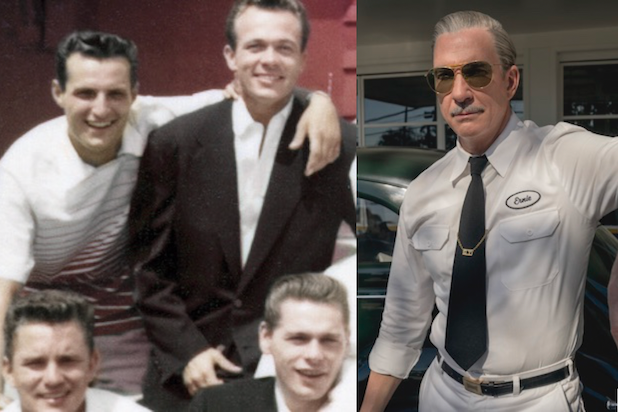 Caution: This story contains mild spoilers for the first episode of “Hollywood.”

Ryan Murphy’s limited series “Hollywood” is a mixture of fiction and fact, with its fictional characters set against actual events and people in the movie industry during the years after World War II. And because of the way the Netflix limited series approaches its story, it can be tricky to tell the truth from the fantasy, particularly since the whole idea of “Hollywood” is to tell a story of what could have been, not what was.

But that alternative history uses real history as a jumping-off point, so viewers are bound to wonder about some of the events and settings depicted in the miniseries — particularly the first few episodes, before the story veers into obvious invention.

One of the prime settings for the series is a Hollywood gas station run by a suave operator named Ernie West (Dylan McDermott). Ernie has hired an array of good-looking young men to not only pump gas, but also supply sexual services to both women and men who come into the station and say they’d like to go to “dreamland.”

And the gas-station scenes are certain to get viewers asking if an escort service was really run out of a gas station that catered to the Hollywood crowd.

The answer to that depends on whether or not you believe Scotty Bowers, who is clearly the model for the Ernie character.

Bowers was an Illinois-born former WWII serviceman who moved to Los Angeles after the war – and in his 2012 memoir, “Full Service,” and the 2017 documentary “Scotty and the Secret History of Hollywood,” he said he launched what would be a 30-to-40-year career as a genial Tinseltown flesh-peddler when Walter Pidgeon came into a gas station where Bowers was working and offered him $20 if they could spend the afternoon together.

A naked swim in Pidgeon’s Beverly Hills pool turned into a torrid sexual threesome with Pidgeon and a friend. For years after that, Bowers said, he did indeed run an escort service out of a gas station on Hollywood Blvd., supplying men to women, men to men, women to women and women to men. (He didn’t take a cut — money only passed between Scotty’s employees and his customers.) Bowers said the sexual encounters sometimes took place at the customers’ homes, sometimes in a trailer located in the back of the gas station, both of which are depicted in the miniseries,

“Over the years more Hollywood personalities secretly congregated at that little gas station than anywhere else in town,” Bowers wrote. “It was a scene that saw as much furious action as the busiest studio back lot. The place became a magnet for those in quest of carnal thrills and escapism of every kind. A cavalcade of movie stars and others were attracted to the station like the proverbial moth to a flame. I became the go-to guy in town for arranging whatever people desired. And everybody’s needs were met. Whatever folks wanted, I had it. I could make all their fantasies come true. No matter how outrageous or offbeat people’s tastes, I was the one who knew how to get them exactly what they were after. Straight, gay, or bi; male or female; young or old – I had something for everyone.”

Bowers’ book, which is full of gossip about the sexuality of long-dead icons like Cary Grant, Rock Hudson (a major character in “Hollywood”), Charles Laughton, Katharine Hepburn and Spencer Tracy, was greeted upon its publication with some skepticism, particularly for the way in which Bowers claims to have sex with or supplied sexual partners to so many famous people.

But his stories have also been backed up by a number of people who were around Hollywood at the time. Several Hollywood biographies, including ones on Vivien Leigh and Katharine Hepburn, describe the Richfield station in more or less the same way Bowers does. Matt Tyrnauer, who directed “Scotty and the Secret History of Hollywood,” said he found at least anecdotal confirmation for “almost everything” Bowers said. “It all adds up,” Tyrnauer told the New York Times.

And Robert Hofler, a journalist whose book “The Man Who Invented Rock Hudson” chronicles decades of gay life in Hollywood, had many conversations with Bowers and found him credible. “Scotty knocked down more legends than he confirmed,” he said.

In “Hollywood,” the Ernie character retains some of Bowers’ own biographical details, but he is fictionalized in several ways. For one thing, Bowers was in his early-to-mid 20s during the time when the film is set, while McDermott is more than 30 years older than that. And Ernie’s life goes in a direction very different than the real Bowers, who became a bartender after he left the gas station, and who died last fall.

The miniseries also changes the name and location of the gas station, calling it Golden Top Gas and locating it at the corner of “Normandie and Citrus” – an intersection that doesn’t actually exist, since Citrus and Normandie are north-south streets that never intersect.

In truth, the gas station where Bowers says he ran his escort service was a Richfield station, and it was located at 5777 Hollywood Blvd., at the corner of Hollywood and Van Ness.

A fire station occupies the property now – and coincidentally, if you look south from the station you’ll be staring at the big, new Netflix building, which sits directly across the Hollywood freeway, about a third of a mile away.