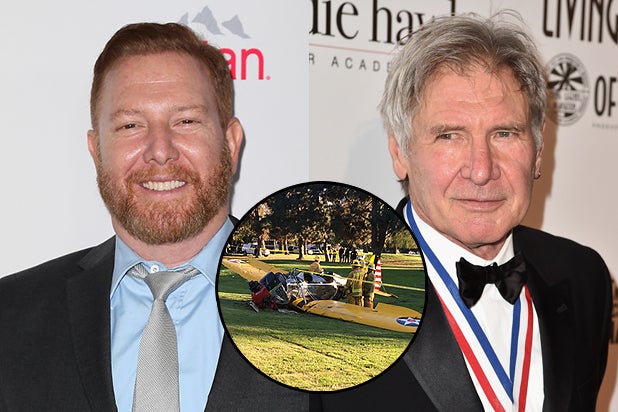 Hollywood mogul Ryan Kavanaugh witnessed the crash of Harrison Ford’s World War Two vintage plane on Thursday and said that without the actor’s skillful piloting, Ford would have died.

“He had a five-second decision to make,” Kavanaugh told TheWrap in an exclusive interview. “As the pilot, when an engine goes out it’s pure instinct.

Kavanaugh flies a helicopter and maintains an office at the Santa Monica Airport — where Ford’s aircraft departed moments before crashing.

Unaware that the movie star was piloting, he saw Ford’s plane get into trouble about 1,000 feet above the runway. “He could have turned around gone back to the runway he would have crashed and killed himself,” said Kavanaugh.

“He did exactly what you’re supposed to do. You rotate it and take it to the ground to the right and it won’t stall out,” he continued. “The problem with these planes is if you slow down there’s not enough air speed, the lift stops and the nose will point down.”

Kavanaugh added: “Instead he knew that he couldn’t do that with the plane. He did the proper roll turn that you need to do and kept it going so he would’t stall out, and found a big open field in the golf course. “

Ford, 72, is in “fair to moderate” condition after crashing his plane at the Penmar Golf Course in Venice.

Ford had just taken off from nearby Santa Monica airport and requested a return before the aircraft crashed, the Federal Aviation Administration said. The actor is being treated at Ronald Reagan UCLA Medical Center in Westwood, officials said.