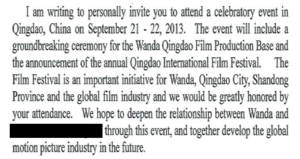 Among the stars expected to attend are Leonardo DiCaprio, John Travolta, Kate Beckinsale and Christoph Waltz, according to an individual with knowledge of the event. TheWrap confirmed DiCaprio and Travolta’s attendance. Representatives for the other stars did not get back to TheWrap immediately.

The fact that moguls of that level would jet to China for two days in the midst of the fall movie season is a signal of how important  Wanda – and the massive China movie market – has become to the global movie business.

A Sony spokesman said Li Chow, General Manager of Sony Pictures Entertainment, China, Inc. was attending along with senior distribution executives. IMAX Corp. CEO Rich Gelfond was confirmed in attendance; Lionsgate declined to comment on the participation of its executives.

The Chinese giant Wanda, which bought the AMC Theatres last year for $2.6 billion,  put together the summit to “deepen the relationship” between the company and Hollywood power-brokers and “together develop the global motion picture industry,” according to the invitation, obtained by TheWrap.

The event will include a “groundbreaking ceremony for the Wanda Qingdao Film Production base” and the announcement of a Qingdao international film festival, according to the invite.

Jeff Sneider and Josh Dickey contributed to this report.