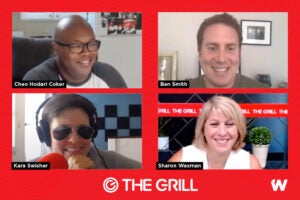 For almost six months, Hollywood executives and producers have been figuring out how to safely resume production, and with that, new policies have had to be put in place and filmmakers have had to pivot in the way they make content. And according to many producers, we’re never going to get back to the way things were pre-COVID — instead, we’re going to a face a “new normal.”

“Necessity breeds invention,” Linda Berman, who is currently in pre-production on “The Mahalia Jackson Story” in Vancouver, said during a producers roundtable at TheWrap’s annual media conference TheGrill, presented by NFP and Lifetime. “I don’t know if we’re going to get back to normal — we’re going to have a new normal and we’re all going to have to pivot to figure out what the next steps are to be creative in this environment.”

Cinetic Media founder and veteran film sales agent John Sloss said that he has a lot of documentaries in production, and he anticipates that to continue as scripted content will face more creative challenges to resume production over the next few months.

“You have to assume that if a production shuts down scripted for a year and documentaries keep going, the trajectory of docs becoming more valuable and more watched is only going to continue and rise,” he said.

A lot has changed in the past six months. Berman said that while shooting “The Mahalia Jackson Story” the team has been rewriting scenes and have been trying to figure out how to shoot big scenes in locations like Carnegie Hall with more CGI and fewer extras. Hand-to-hand closeness, given social distancing regulations, has pretty much been eradicated.

Invisible Narratives’ Andrew Sugerman, who just produced “Songbird,” a film that was shot during the pandemic, said that their script was written during the beginning of the pandemic and that it “reflects that isolation and that sense of being alone and how to reflect that in society.”

“With ‘Songbird,’ we worked closely with the guilds and we followed every guideline we could find on how to do this safely,” he said, noting that the production did extensive testing in closed environments, broke the shoot down into zones to reduce cross-contamination and generally used fewer crew members overall. “I am very happy to say that we did not have any issues. All the processes put in place made us go through the shoot without incident.”

However, he pinpointed two big challenges of shooting on set: the fear of humans falling back into normal behavior, and mask-wearing, which poses difficulties for crew member communication.

Lilly Burns, longtime TV producer and founding member of Jax Media, is currently in production on six shows, four of which are late-night talk shows that can easily be contained. But for the other shows, there is virus testing three times a week, zoning and a lot of personal protective equipment. However, there is no quarantine requirement for cast and crew members: “They are abiding by a social contract to just go home afterwards, and so far, no incidents.”

Also Read: Welcome to TheGrill 2020: A Virtual Summit as Change in Hollywood Accelerates

While productions will consist of smaller sets and smaller casts for the near future, Armory Films’ co-founder and producer of “The Peanut Butter Falcon” Tim Zajaros is optimistic about returning to some sense of normalcy. “For us, we’re definitely picking projects that are more COVID-friendly, with smaller sets, smaller casts,” Zajaros said. “In a year or two — hopefully less than that — I think we will be able to go back and make productions with large crowds and bigger set pieces.”

Sloss added that the social-justice movement spurred by the killing of George Floyd has also changed many people’s thinking in the industry, and will change what stories will be told in future projects. “When we come out of this, there is going to be a lot of different thinking,” he said. “Then there is the issue of film festivals not occurring and then there are films that would’ve been relevant that in this environment is not smart to bring them to the market. It’s incredible how much has changed.”

And according to the panelists, Hollywood will see some long-term changes from the shutdown. Burns believes that productions will learn that “you can do a lot with a little” and that projects with outsize personnel will become obsolete. Both Sloss and Sugerman said the pandemic has and will change the outlook toward windows between theatrical and at-home releases, a long-debated topic in the industry.

“This is finally going to accelerate the collapse of the windows,” Sloss said. “If theaters are going to come back and hopefully they will and hopefully we will band together to get them back, I think the quid pro quo will be the idea of films to be flexible and to shift quickly to platforms.”

“I do agree about the collapsing of windows, but I do think there will be alternative forms of distributions,” Sugerman added. “Last week, Invisible Narratives launched our own PVOD on which we’re going to launch a film we just finished… Those shifts are going to be permanent — you’ve probably seen five years accelerated into five months.”

Burns added that projects that are starting to shoot now seem to be smaller productions or bigger blockbusters that “can buy themselves out of this.” A big challenge to resuming production is insurance for COVID-related claims, an item that most policies exclude — preventing many production companies from starting to shoot. There are some insurance companies that have started to offer COVID-related coverage, but it is limited and extremely expensive.

Dominique Butler, an assistant VP of Entertainment at leading insurance broker firm NFP who specializes in entertainment coverage, said that any new productions or blanket wrap-ups have seen no pandemic coverage, but since then, she’s seen two workarounds.

“We’ve had two options as far as a pandemic buy-back policy,” she said. “It basically allows production companies to buy back past coverage as a standalone option to the exclusions that are not found in policies. Premium wise, it’s not cheap, it’s not for everyone, but at least it’s an option to buy back some of that coverage so we can create new content.”

She also said that typically, these policies are averaging 10% of the overall limit — so if you’re purchasing a million-dollar limit in coverage, the premiums are about $100,000. “It’s not an easy pill to swallow, but we’ve looked at ways of bundling it or spreading it out over several projects that are shooting within six to 12 months,” she said. “We have been trying to be as creative as to what’s available.”

This year’s digital-first experience for TheGrill will focus on the future of theatrical, streaming revolution, building inclusion from within and the growth in podcasting and gaming.  Attendees will have access to keynotes, panel conversations, roundtable discussions and virtual networking.