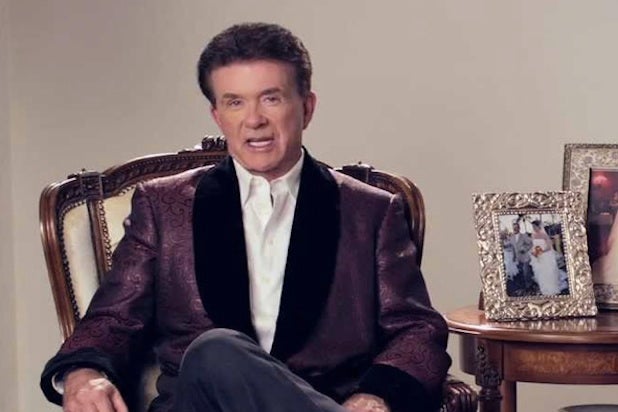 Thicke, 69, died of a heart attack after playing hockey with his son, Carter.

“RIP to my brother Alan Thicke,” Russell Simmons wrote on Twitter. “The world has lost an icon.”

“Such a good husband, father, brother, and friend. He will be deeply missed,” “Fuller House” co-star Bob Saget wrote.

Actress Gloria Loring, who was married to Thicke from 1970 to 1984 and is mother to Robin and Brennan Thicke said: “Thank you for your kindness concerning Alan Thicke’s passing. It is a shock. We were all just together for Thanksgiving. He was talented, funny and deeply devoted to his family. Rest In Peace, dear one.”

“We are deeply saddened to hear of Alan’s passing,” Brad Schwartz, President of Pop TV, said in a statement to TheWrap. “He was a part of our Pop family and was a tremendous talent. He was also for all who knew him, an amazing father and a true gentleman. We had the privilege to work with America’s Favorite Dad and his loss is one that is deeply felt.”

Twitter was quickly filled with other messages from celebrities.

I’m sad beyond words that Alan Thicke has passed away. I’ve known you since I was 8 years old… https://t.co/GLXSTK1nd7

I loved #AlanThicke He was a great Canadian and friend. Funny and kind. My condolences to his family. #RIPAlanThicke

America loved Alan Thicke. I’m so sad he’s gone. Sending so much love to his family.

RIP to my brother Alan Thicke. The world has lost an icon. ???????? pic.twitter.com/zIK0hzjihK

Alan Thicke was always the nicest and happiest person in the room. Gone way too soon. Rest In Peace.

So so sad to hear about the passing of #AlanThicke. Such a nice guy. My thoughts and prayers are with his loved ones. Rest in love. ❤️

To my @WifeSwap partner…I’ll miss you. RIP Alan Thicke

Had the pleasure of meeting Alan Thicke and his amazing wife Tanya a few years back.. my thoughts and prayers are with his family. RIP ???”

So sad is the passing of Alan Thicke. Such a good husband, father, brother, and friend. He will be deeply missed. Rest in peace dear Alan.

Condolences to my dude @robinthicke & the entire Thicke family for their loss. #RIP to the late great #AlanThicke

Just played golf with Alan Thicke a few months ago in Vegas (w/ @andre_reed83 ) A true icon, and… https://t.co/Ir3sn4Ipyq

Very sad about the passing of Alan Thicke. I was fortunate enough to spend time with him & golf with him. #kindman #generousman #RIP

.@Alan_Thicke was always so gracious & kind to me. A very very cool guy. Rest In Peace my friend. God bless this great Canadian!