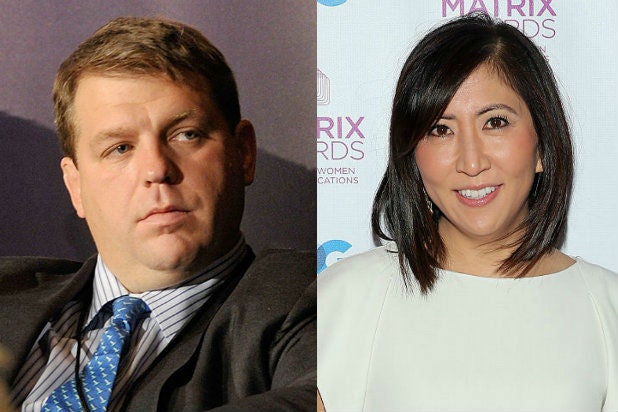 The Hollywood Reporter and Billboard are for sale amid ongoing losses and co-president Janice Min is stepping aside, individuals with knowledge of the company told TheWrap.

A spokesman for the company confirmed that Min is leaving and that Matthew Belloni would take over as editorial director of The Hollywood Reporter while Billboard’s current Senior Vice President for Content, Mike Bruno, will become editorial director of Billboard. Min will  join the parent company Eldridge Industries to advise on “devising a media investment strategy,” according to  a news release.

Eldridge’s Todd Boehly, the former Guggenheim Partners hedge fund manager who assumed ownership of The Hollywood Reporter-Billboard Media Group in December 2015 when they were spun off from Guggenheim Media, is looking for a new buyer after failing to stem years of financial losses.

The group suffered around $20 million in losses in 2016, and has sustained similar annual losses for the past several years, multiple insiders told TheWrap.

A spokesman for THR did not confirm that the company was for sale. An insider told TheWrap that there have been “expressions of interest” in buying the media company, adding: “We evaluate all these offers on their own merits and when there is something to announce, we announce it. Right now, we have nothing to announce.”

Last November, Boehly sold off another former Guggenheim entertainment property, Dick Clark Productions, to the Chinese conglomerate Dalian Wanda for a reported $1 billion. However, that sale is not yet complete, according to an individual close to that deal. Dalian Wanda paid in installments and one payment has yet to go through. The size of each payment is not clear, but is expected to occur at the end of February.

Min, who was named co-president and chief creative officer of both THR and Billboard in 2014 for an annual salary reported to be worth more than $2 million, is expected to take a more limited role at the publications as early as this week, according to one individual close to the sale. The move is seen as a way to reduce overhead to make the company more attractive to potential buyers.

Min is credited with transforming an anemic daily show business trade into a glamorous, talent-and-executive-friendly weekly — but at great expense and ongoing losses that have made for challenging business prospects. Plans to establish a cable channel based on the Billboard and THR brands have not materialized thus far.

Min joined THR in 2010 from a long and successful tenure at celebrity weekly Us Magazine. Lagging behind fellow print trade Variety in both design and relevance, according to an interview last year with NPR, Min pushed the majority of nuts-and-bolts industry coverage to THR.com and killed the daily print edition in favor of a glossy weekly.

The website reports 15 million unique monthly visitors, according to ComScore, and the magazines have a monthly circulation of 70,000.

Min has consistently likened her revamp of THR to the glossy pages of iconic Conde Nast title Vanity Fair, but its subscriber numbers have never moved beyond a fraction of Graydon Carter’s monthly.

Min spent four years as the magazine’s editorial director before assuming her co-president role, an upgrade and out-maneuvering of the group’s then-head and former Yahoo interim CEO Ross Levinson, TheWrap reported at the time. She more than doubled her salary when she took on the job.

In June of last year, Min made a rare foray into the pages of her own magazine by sitting down with then-Republican presidential candidate Donald Trump at his New York City property.