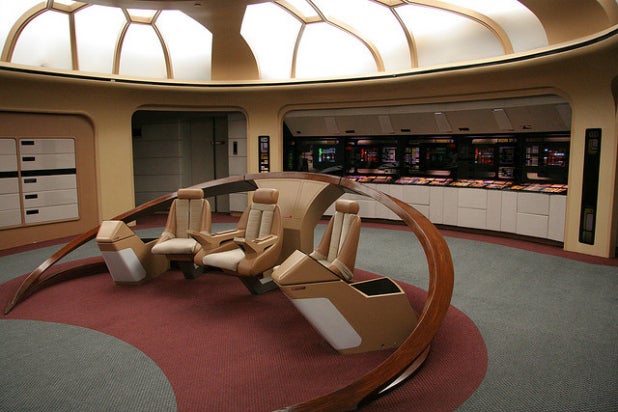 Hollywood may be getting exactly what it needs in 2015: another museum.

Writer and fanboy Huston Huddleston is pioneering The New Starship Foundation’s effort to open Hollywood’s first science fiction museum, and he’s already got the refurbished “Star Trek” Bridge to start it. Now he just needs the money, and lots of it.

Thus far, donations for the project have come from Paramount, Google, Bentley Systems, Entertainment Earth, with support from “Star Trek” actors including Brent Spiner and William Shatner, Huddleston told TheWrap. But the $100,000 Huddleston has raised to-date simply won’t cut it. He needs millions.

So Huddleston is turning where new Hollywood turns: Kickstarter. But his $83,000 goal there is modest considering how much a museum costs to actually get up and running. He just needs that cash, to attract bigger lump sums.

He has a knowledgeable Board of Directors in play, including the original writers, designers and producers behind “Star Trek,” “Battlestar Galactica,” “Tron,” “Firefly” and “Back to the Future.” Ronald D. Moore, David Gerrold, Rick Sternbach, Andrew Probert and Timothy Earls are among the group.

Rhetroactive — the company who helped create Universal’s “Despicable Me” attraction and the Grammy Museum — is also helping develop the project, he says.

“Every actor I’ve met from ‘Doctor Who’s Billie Piper to ‘Star Trek’s Karl Urban has been completely supportive of our museum and want to take their kids to the opening,” Huddleston said in a press release. “This is something everyone seems to want, from the fans, to the actors, to producers and studios. It’s an educational nonprofit museum that will celebrate the legacy of everyone involved, it’s a win-win for everybody.”

Huddleston’s fandom is the driving force being the project, but that doesn’t put asses in Captain’s chairs. His prized possession and museum centerpiece — which came from a departing Paramount employee tip — might.

So far his main attraction — Huddleston’s “Star Trek” Bridge — sat on the studio lot for five years, and was slated to be destroyed the very week that he took ownership of the set. Seven thousand dollars worth of shipping later, the Bridge was in Huddleston’s backyard. Now he wants it in Hollywood’s new future favorite museum.

The undertaking of course is an enormous one, and it still has a very long way to go. But Huddleston is optimistic — plus, he has a backup plan if it doesn’t quite have a happy sci-fi ending: “I am 100 percent confident that we are going to finish restoring the Enterprise D bridge and open it, even if it’s for a temporary time,” Huddleston told TheWrap: “If worst came to absolute worst, we’d donate what we have to the NASA museum in Houston.”