Even as moguls shut down their Christmas lights in Bel-Air to head out to the yacht in St. Bart’s, a fever known as 3D is gripping Hollywood.

The nationwide thumbs-up over “Avatar” — which just two weeks ago had the town on edge — is now creating thumb-whiplash from insiders hitting the Blackberry with newfound 3D zeal. 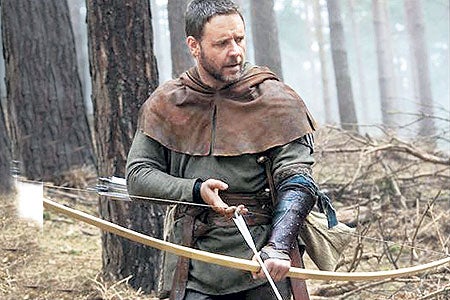 Director Ridley Scott is breathing down the neck of executives at Universal to get them to approve making a 3D version of his new $200 million epic, “Robin Hood,” according to one person close to the project.

A deal is in the works with Studio Canal, which owns the rights to “Terminator 2,” to fast-track making the 3D version.

And one can only imagine what Steven Spielberg — whose reported comment that "Avatar" was the best film he’d ever seen has been repeated to me by no fewer than four awestruck colleagues — has planned for “Jurassic Park.”

Even directors who are not known for fancy, high-tech special effects are jumping on the bandwagon. Johnny Knoxville and producer Spike Jonze will be shooting the "Jackass" sequel in 3D. It will shoot in January and be called “Jackass 3D.”

“We’re going to take the same 3D technology James Cameron used in ‘Avatar’ and stick it up Steve O’s butt,” Knoxville said in a typically classy news release from MTV and Paramount. "We’re taking stupid to a whole new dimension.”

Sony’s sequel to its sleeper hit "Zombieland" is also now going to be done in 3D.

“The movies have to make sense in 3D,” the film’s producer Gavin Polone told TheWrap. “Zombieland makes a lot of sense — it’s an action movie, there’s stuff coming at camera. We’ll write to it. You don’t want to make a heavy drama that way.”

But don’t count the heavy dramas out. I don’t personally feel a need to be inside the “Brokeback Mountain” tent, for example. But there is reason to fear that this technology will be overused. And the economics have to make sense.

First is that there are low-cost technologies that now make it possible to turn older movies into 3D versions.

Polone warned against this.

“You wouldn’t want to remake ‘Star Wars,’ or ‘Close Encounters.’ just because you can do it in 3D. it’s bad. Then you’re just back into terrible remakes of good movies.

“If you take a classic movie that’s fantastic, what you’re up against is people will just say you blew it. “

Wise words that will probably be ignored.

And for major productions, creating a 3D version is not necessarily a prohibitive cost.

One knowledgeable executive told me that it would cost only an additional $7 to $8 million to create a 3D version of “Robin Hood.” The question is — what will that add to the box-office total?

In the short attention span of Hollywood, those numbers are now dancing with sugar plums.

With "Avatar" winning raves from critics (at one point it hit 100 percent on RottenTomatoes), average viewers and even the most hard-bitten moguls (from David Geffen: “a complete gamechanger”) now — faster than you can say "man the lifeboats!" — everyone is on board.