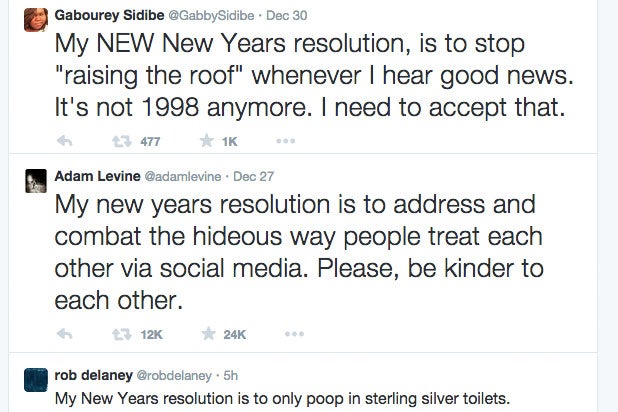 Hollywood actors, comedians and producers have been tweeting their New Year’s resolutions with the start of 2015 less than a day away.

“It’s not 1998 anymore. I need to accept that,” the Oscar-nominated actress tweeted.

See the list below of other resolutions made by Hollywood:

My New Years resolution is to stop speaking my thoughts. I gotta start keeping that shit in.

My NEW New Years resolution, is to stop “raising the roof” whenever I hear good news. It’s not 1998 anymore. I need to accept that. — Gabourey Sidibe (@GabbySidibe) December 30, 2014

My New Years resolution is to only poop in sterling silver toilets. — rob delaney (@robdelaney) December 31, 2014

My new years resolution is to address and combat the hideous way people treat each other via social media. Please, be kinder to each other. — Adam Levine (@adamlevine) December 27, 2014

Also Read: 11 Hollywood Stars Who Did Big Business on Broadway in 2014 (Photos)

New Year’s resolution: To have more fun. Video made by Luc Bergeron w/team who worked for 124 hours to compile it. https://t.co/42HwAPDMgr — Wes Craven (@wescraven) December 27, 2014

BH’s Worldwide! My New Years Resolution; To take what we’ve built, over the last 26 years, to the next level in 2015! This year- WE RIDE!