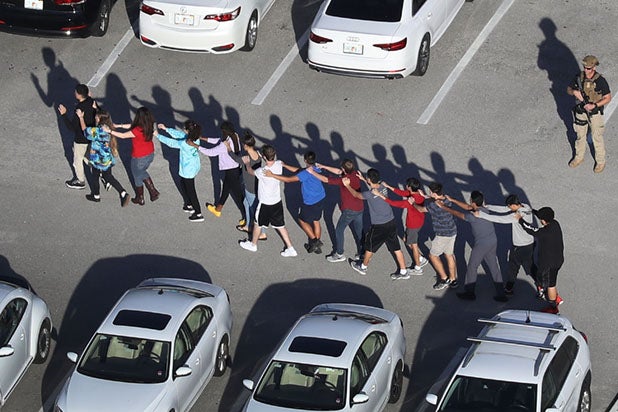 The U.S. experienced another mass shooting on Wednesday when a man opened fire on a high school in Parkland, Florida, leaving 17 people dead.

The incidence of yet another school shooting brought the topic of gun control back into the national conversation, sending both Parkland and the hashtag #GunControlNow trending across the country.

A number of Hollywood stars, including Reese Witherspoon, Elizabeth Banks, Alyssa Milano, Gabrielle Union and Sophia Bush were among those calling on lawmakers to pass new legislation to limit civilian access to certain firearms and prevent future shootings.

Also Read: Piers Morgan Calls out Trump After Florida School Shooting: 'What Are You Going to Do About It?'

“Heartbroken over the news of another school shooting,” Witherspoon wrote. “This is the 18th in 45 days of 2018. Students & teachers shouldn’t have to fear for their safety. We must do more to prevent these senseless acts of gun violence. My heart is w/ the people in Parkland, FL. Enough is enough.”

Police were alerted around 2:30 p.m. ET of an active shooter at Marjory Stoneman Douglas High School in Broward County. The suspect was later identified as Nikolas Cruz, a former student who had been expelled for disciplinary reasons. 17 people were killed and at least 14 more were injured.

As we send our thoughts & prayers to the people of Parkland, Florida how about we, the people & govt of America, actually DO something abt gun violence.

Heartbroken over the news of another school shooting. This is the 18th in 45 days of 2018. Students & teachers shouldn't have to fear for their safety. We must do more to prevent these senseless acts of gun violence. My heart is w/ the people in Parkland, FL. Enough is enough.

Heartbroken and disgusted hearing about Parkland. This isn't the way it has to be. Our country is broken and it must be fixed. Thoughts of peace to all the families

Sorrowful for the lives lost at the Parkland, Florida school shooting today. 12 school shootings in 2018 and it’s only February?!! When will enough be enough? ???????????? #GunControlNow

Enough is enough is ENOUGH. The time for #sanegunlaws is NOW. Prayers to #Parkland and all those affected. ???? @Everytown @Bradybuzz pic.twitter.com/ekhLcewkd9

Florida … I love you. I am devastated for you. There are no words.

When will it be enough, leaders? When will you do something? How many more children have to run from their schools, sobbing, with their hands up? How many?

My heart is breaking. All of my thoughts and prayers and love go to all affected in #Parkland.

Like thousands in South Florida, we sent the boys to school in Broward County this morning… there are no words to describe the despair, horror & anger. This does not have to be our collective reality. How many more? How many children must not make it home?

because thoughts & prayers are indifference tied up with a bow #guncontrolnow

THESE ARE THE MEMBERS OF THE HOUSE AND SENATE THAT HAVE TAKEN MONEY FROM THE NRA: https://t.co/lWzEUkd1Ah #GunControlNow pic.twitter.com/K543v9XlWM

WE NEED TO TAKE A STAND. WE NEED TO MAKE A CHANGE. HOW MANY MORE PEOPLE HAVE TO DIE FOR THAT TO HAPPEN?! #GunControlNow #floridaschoolshooting

my heart is broken hearing about the #Parkland school shooting. im at a loss for words. just sending so much love and positive energy to the victims and the families/loved ones/friends of the victims. to the world. we need more love. and we NEED #GunControlNow . NOW.

SEVENTEEN people were killed at that Florida school today. Gunned down for what?! Why?#GunControlNow

Stop voting for people who are supported by a terrorist organization. #nra #GunControlNow