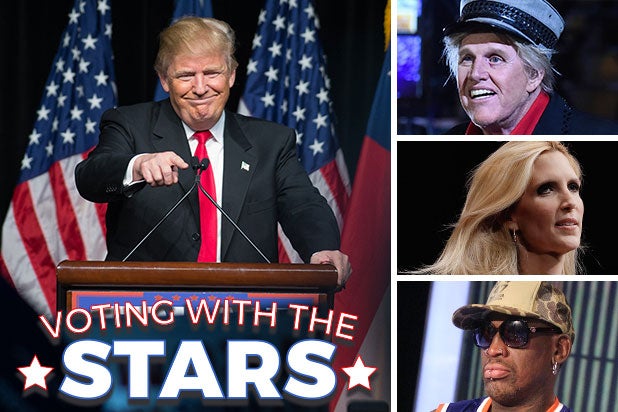 Donald Trump may not have many endorsements from many A-listers or professional politicians, but celebrities are starting to come out for the former host of “Celebrity Apprentice.”

Welcome to another edition of Voting With the Stars, TheWrap’s breakdown of who in Hollywood is voting for each of the remaining presidential candidates. We’ve assembled our master list of who supports who by scouring public statements, social media posts, news reports, and campaign contributions.

Of course, people change their minds, so we’ll update our list as candidates gain — or lose — celebrity endorsements. (For other candidates’ supporters, click here. In fact, you may want to save that link, because the list of endorsements includes more than 200 stars, power brokers, and rich folks — and we’re adding to it every day.)

The Donald’s list of celebrity supporters is nowhere as star-spangled as the ones for Democratic rivals Hillary Clinton and Bernie Sanders. Still, it’s pretty good for a Republican, given Hollywood’s liberal leanings.

Also Read: Donald Trump Gets Endorsement From Azealia Banks Because 'He Is Evil Like America'

Clinton may get the most high-profile stars — including Leonardo DiCaprio, Beyonce, and Kanye West — but Trump has come a long way from a few months ago, when few in Hollywood would acknowledge backing him. That’s changed as he’s won three out of four of the early-voting states, losing only Iowa.

And our count of his supporters may be low: Some Hollywood Republicans, fearing ostracism or just awkward conversation, keep their politics close to the vest.

Who are you voting for?