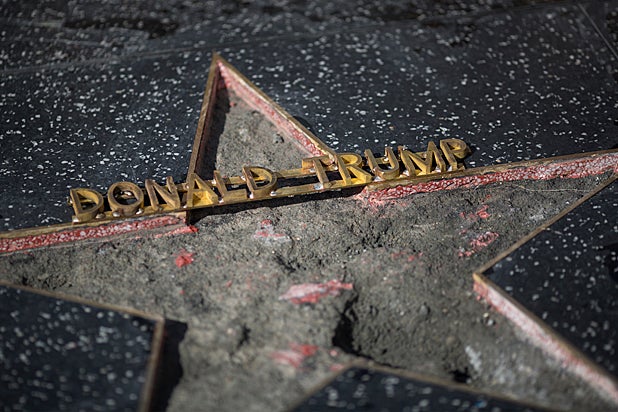 While the U.S. was locked in a national grip of anxiety Tuesday night as Donald Trump and Hillary Clinton battled it out neck and neck in the polls, a slew of Hollywood stars turned to social media to share their stress.

Twitter acted as an online therapist for millions of people across the country who were becoming increasingly nervous as the results rolled out.

“I don’t know if this helps, but here’s a pic of my dog Grumpus back in 2005,” comedian Patton Oswalt tweeted, along with a photo of a very cute pup.

And yes, it did help, thank you.

Mia Farrow simply tweeted “Xanax,” while Adam Lambert expressed disbelief that so many people were really voting for the Republican presidential candidate. “Anyone voting for Trump: did you watch ANY of the debates?? I mean….. C’mon!” he asked.

“I said BREATHE. (I am talking to myself too, y’know),” “Hamilton” creator Lin-Manuel Miranda wrote. We’re trying …

While Sarah Silverman reminded everyone that Brexit happened there not so long ago too.

See the emotionally-charged tweets below.

I don't know if this helps, but here's a pic of my dog Grumpus back in 2005: pic.twitter.com/qaUeyjOv7D

Anyone voting for Trump: did you watch ANY of the debates?? I mean….. C'mon!

someone give me hope

This is too close. Its not going to be over tonight #ElectionNight

You know how Twitter asks "What's happening?" when you go to type a new tweet? My sentiments exactly! #ElectionNight

This election is much closer than anyone anticipated. West coast: you can still vote! Get out there! This is close!

That presupposes I can still stomach working for Fox after this. https://t.co/7fHwBNM6jG

I truly cannot visualize the rambling, incoherent creature I saw at the debates now addressing the nation from the Oval Office.

Going from wine to whisky.

It shouldn't be this close ???? #ElectionNight

Even if he doesn't win I'm ashamed and embarrassed by the bigotry, racism and sexism this election has exposed. Now we can't deny who we are

It was those god damn Trump hats. They were so fucking on point. Damn it! You have to give it to those dope hats.

Don't recognize this country tonight. If Trump wins, get ready 2 lose a lot of money tomorrow followed by a lot of rights for the next 4 yrs

Right now I envision Donald Trump googling “What does the U.S. President do?”

I stole a Twix from the BBC cafe. I'll pay back tomorrow

I'm am gonna be so tired tomorrow. #ElectionNight #ImWithHer