Are virtual and augmented reality truly the Next Big Thing for Hollywood? While every major studio is investing in VR experiences, so far most are short, under-10-minute extensions of big franchise fare like “Alien: Covenant” or video games expanding on familiar characters like Warner Bros.’ “Batman: Arkham” that have little to do with traditional storytelling.

“I believe immersive entertainment is going to be a real thing,” Vicki Dobbs Beck, executive in charge at ILMxLAB, told TheWrap. “We’re in the early stages, and a lot of people are skeptical and taking a wait-and-see approach.”

With VR hailed as a hot game-changing technology, and analytics firm Greenlight Insights projecting VR revenues to grow from $7 billion in 2017 to a staggering $75.4 billion in four years, Hollywood wants to ensure that it will own a piece of that pie.

But not only is virtual reality in its technological infancy, the revenue is so far rather virtual as well. According to Tim Merel’s Digi-Capital, virtual reality generated $2.7 billion in 2016, mostly from the sale of hardware like Facebook’s Oculus Rift and the HTC Vive that rolled out to consumers for the first time last year. That’s up from $660 million in VR gaming revenue in 2015, per Statista, but well behind the $3.8 billion that Digi-Capital had projected for last year.

The same is true for augmented reality — a technology that superimposes a computer-generated image on a real-world vision but that is widely seen as less compatible for studios looking to exploit characters and storytelling. (Thanks to Niantic’s hit game “Pokemon Go,” AR produced a surprise $1.2 billion in revenue last year.)

Given that the public acceptance of VR has been relatively slow to take off, it’s no surprise that Hollywood has also lagged behind. Here is everything that is keeping studios from strapping on headsets.

1. The VR audience is still small

So far the audience is tiny. While Greenlight projects 100 million VR devices will be shipped to consumers by 2021, Facebook’s Oculus Rift and the HTC Vive shipped less than 1 million units combined in 2016. Both product launches fell behind projections, hampered by hardware delays and canceled pre-orders.

The vast majority of VR revenue so far comes from sales of equipment — rather than content for that gear that studios and gaming companies might create. That may change, but it will be a gradual one. Starting sometime next year, the $400 Oculus Rift bundle will include Disney’s “Marvel Powers United VR” interactive game allowing players to suit up as their favorite Marvel superhero.

Consumers who don’t want to shell out $400 for their own device can visit standalone VR centers — essentially arcades — that have opened in malls and movie theater lobbies in the last year, many operated by IMAX.

You can try VR experiences, including some of the studio-affiliated pieces like Lionsgate’s “John Wick Chronicles,” for $7 to $12 a pop. According to IMAX’s Chief Legal Officer Rob Lister, the company splits the revenue with the content developer and the operator if it’s not an IMAX-owned center.

But major revenues from VR content have yet to materialize.

“The big elephant in the room is, How do you monetize this?” Accenture senior analyst Aaron Sauceda told TheWrap. “How do you get that ecosystem working well, where you have people creating content for VR and then people adopting it and it spiraling from there?” 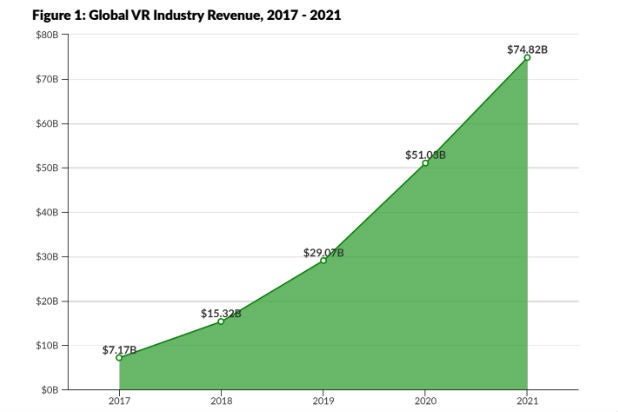 Producing premium VR content can run “up to $1 million per minute,” one top VR executive told TheWrap — though the cost can range widely depending on how interactive a piece is and how long.

“Anything that’s going to be worthwhile can get outrageous [in cost],” added another studio insider familiar with VR production prices.

Most content, especially based around theatrical releases, costs in the $2 million to $4 million range to produce, according to one high-ranking movie studio exec. It would be “hard to do anything very good” for less, the executive said.

Some gaming companies have spent up to $10 million per project for integrated VR, the executive added, noting that games tend to have a much higher return on investment since users play them over and over again.

Despite the limited revenues so far, Sauceda sees the advantages for studios exploiting their intellectual property in the VR space as big tech-oriented players like Google, Facebook, Microsoft and Samsung ramp up their own efforts. “If nothing else, this is a good time to invest and maybe play the long game,” he said.

3. The technology is still young — and sometimes glitchy

VR tech itself is not yet seamless, as TheWrap discovered when visiting the IMAX Centre in Los Angeles and had a computer crash midway through “Life of Us,” a seven-minute re-creation of Earth’s evolution from Chris Milk’s Within VR production company.

Many early users have complained about feeling light-headed or even vomiting while wearing headsets. “If you’ve ever used VR, you know you don’t want to have the glasses on your face,” said Phil Contrino, the Data and Research Manager for the National Association of Theater Owners.

Innovators in the field acknowledge the technical challenges — as well as the creative ones in determining just what a VR experience can be.

“No one has figured out what works and what doesn’t,” John Knoll, Oscar-winning visual effects artist and chief creative officer of ILM. “Everyone is experimenting.”

Exhibitors are understandably anxious about studios devoting resources to content that bypasses traditional movie theaters — as well as the prospect of an expensive upgrade of its theaters to accommodate new technology like VR headsets for each seat.

“VR should be viewed as a complement, not a competitor,”  Contrino, said at this year’s exhibitor convention CinemaCon.

It’s no wonder, then, that most of the studio-produced VR projects have been short experiences suited for gamers, whether in VR arcades or at home.

What the field needs most at the moment is a large investment in distribution, one top studio executive told TheWrap, comparing VR rollout to the adoption of digital projectors over now-antique film projectors.

“You could compare it to the early days of digital cinema,” the individual said. “Disney, for instance, spearheaded the effort and paid for a quarter of the first digital projectors to go into movie theaters. Then the exhibitors caught on and said, ‘OK, we’ll fund the rest.'”

For the most part, studio efforts in VR have relied on showing off the technology rather than movie stars — who might raise the production costs but also draw a larger audience. The VR experience based on Sony’s “Spider-Man: Homecoming” and FoxNext’s “The Martian” puts you in the costume of leads Tom Holland and Matt Damon — but without including their face or voice.

“There’s still a mass market for premium VR,” said Andy Vick, who with Rick Rey runs the STXSurreal division of Bob Simonds’ STX Entertainment that aims to create original content exclusive for VR. “A lot of the reasons we’re not seeing that is because we’re not seeing names and faces that we trust in film and TV in these headsets.”

Some A-list directors have dabbled in the genre. In Cannes this year, Alejandro Inarritu premiered an experimental, highly emotional VR exhibit about the experience of a refugee crossing a border — but it played more like an art gallery installation piece than a mass-market movie.

And Kathryn Bigelow made an eight-minute VR film about ivory poachers in the Congo that premiered at the Tribeca Film Festival this year.

Neither of these projects is targeted to a mainstream audience, though, which may be one stumbling block for VR’s growth.

6. Early experiments are cool, but where’s the “Avatar” of VR?

Instead of fast-tracking a feature-length experience for a tentpole movie like “Transformers: The Last Knight,” Paramount plopped a five-minute shooter game based on that action sequel into the lobbies of AMC Theaters nationwide.

Sony offered a free release of its “Spider-Man: Homecoming” VR experience for home units like Sony’s own PlayStation VR and mobile gear like Samsung VR within weeks of the film’s theatrical release.

And at this year’s SXSW Conference, Universal had a hotly anticipated VR companion piece for Tom Cruise’s “The Mummy” that saw long lines around the Austin Convention Center. Viewers sat in vibrating, oscillating Positron chairs that matched an impressive zero-gravity airplane sequence — an experience that’s unlikely to be mass-produced anytime soon in theaters (or living rooms) nationwide.

These are all fine early efforts, but many feel they fall short of VR’s potential. “The idea is not to create marketing material,” Clint Kisker, whose Madison Wells Media has an exclusive pact with Sony to create VR experiences, told TheWrap. “The idea is how do you take what’s uniquely delightful about immersive experiences and make something with that.”

STXSurreal’s Rick Rey noted that Netflix was in a similar niche position before the streaming service stepped up with original series like “House of Cards” led to a $6 billion investment explosion in new content. “VR needs 10 ‘House of Cards,'” he joked.

Also Read: You Can Now Hunt Aliens With Wesley Snipes in Virtual Reality

Of course, Hollywood knows that the Next Big Thing doesn’t always turn out to be a savior in a challenging economic environment.

Less than a decade ago, studios doubled-down on 3-D movie production following the $2 billion blockbuster of James Cameron’s “Avatar.”

But while Hollywood produced a record 68 3-D releases last year, the MPAA reported an 8 percent drop in attendance to 3-D films.