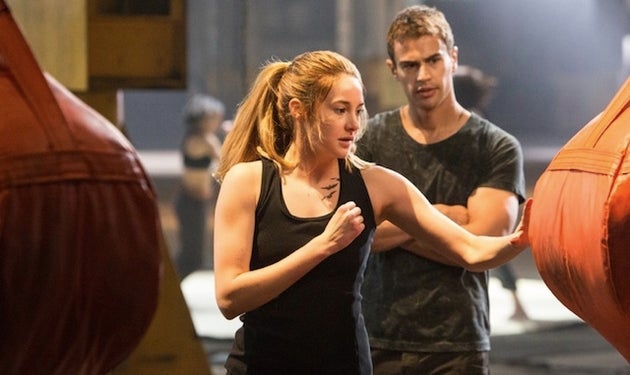 An enthusiastic response to a presentation at Comic-Con coupled with an Entertainment Weekly cover anointing the adaptation of Veronica Roth's science-fiction novel the next hot young adult franchise, has the studio hoping it has another "Hunger Games" on its hands.

"The parallels are very, very strong and very, very similar," Lionsgate CEO Jon Feltheimer said during a call with analysts on Friday.

Also read: 'Divergent' Gets an IMAX Release, Hoping to Be Another 'Hunger Games'

He noted that like "The Hunger Games," "Divergent" is based on a best-selling novel and will arrive with a broad base of fans. So far the book has sold four million copies. However, Rob Friedman, co-chairman of Lionsgate Motion Picture Group, said it would be premature to predict that it will put up ticket sales on the order of the nearly $700 million worldwide that "The Hunger Games" grossed when it hit theaters in 2012.

"I don’t know if we’d ever want to put that burden on any film," he said.

Also read: The Secret Summit Prospectus: How Much the 'Twilight' Films Really Cost

Friedman and Feltheimer also noted that Lionsgate is more judicious in how it allocates its financial resources than other major studios. It budgeted "Divergent" as a "commercial" film, they said, but not as a "blockbuster." That's in marked contrast to the approach that's been on display at the multiplexes this summer, often with diminishing results.

Studios like Universal and Disney had their share of successes, but they also lavished $100 million-plus budgets on more dubious projects like "R.I.P.D." and "The Lone Ranger." Sony suffered two high-profile flops in the form of "White House Down," which cost $150 million to produce and brought in $125 million worldwide, and "After Earth," which has earned $244 million while costing $130 million.

Disney said this week that the failure of "The Lone Ranger" at the box office will force it to take a $160-$190 million write-down and Sony's lackluster performance resulted in a very public rebuke from its largest investor, Third Point's Daniel Loeb.

In the Wall Street Journal on Friday, former Variety editor Peter Bart issued a wake-up call to the industry, writing, "The losses have been daunting to the major studios whose strategy is built around the premise that bigger is better. It's also disappointing to moviegoers, who show strong signs of superhero fatigue."

In contrast, Lionsgate has been more cautious about entering into the crowded summer tentpole season, releasing films like "Now You See Me" and "Kevin Hart: Let Me Explain" as counter-programming and receiving a strong box office response. Not everything works. "Red 2," which the company fielded, will be profitable it said, but it failed to generate much excitement from audiences. Don't hold out much hope for a part 3.

It's also been expert at taking on partners and pre-selling foreign rights as a way to mitigate risk. That limits it's upside if a movie scores, but if, for example, its upcoming science fiction film "Ender's Game" leaves moviegoers cold, the company's 25 percent equity stake means a failure would not bring it to its knees.

"We intend to spend less money to release every picture than a traditional major studio," Feltheimer told analysts.

That formula excites investors. After its quarterly earnings trumped Wall Street's projections on Thursday, shares in Lionsgate jumped 3.6 percent to an all-time high of $35.47.