While Hollywood goes chasing to Abu Dhabi and Mumbai for ever-scarcer funds to finance its movies, the industry might do better just heading to 7-Eleven.

The latest film fund, $30 million to make romantic comedies, thrillers and faith-based dramas, comes from the lottery winnings of Cynthia Stafford, a single Hawthorne homemaker who shared a $67 million jackpot with her father and brother in 2007.

Now she wants to make movies.

"What I like about movies is it’s something ongoing," Stafford said. "Movies from the ’20s, ’30s, ’40s — I still see them today and think, ‘Wow, this is something that can go on forever."

The film fund, which follows the creation of her production company Queen Nefertari Productions, will be repped by the Gersh Agency. The banner already has four projects lined up.

Stafford is CEO and executive producer of Queen Nefertari; Jeff Kalligheri and Lanre Idewu are producers. 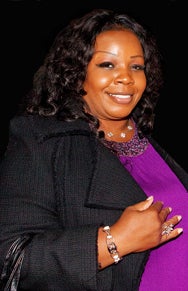 The production funding, which comes from private investments from Stafford and Kalligheri, will be used to finance or co-finance commercial feature films. They aim to expand the fund over the next 18 months by recruiting other investors or forming partnerships.

Given the difficult financing climate in Hollywood of late, with even big names such as Imagine Entertainment, George Clooney and Brett Ratner turning to outside sources like India’s Reliance Big Pictures, Stafford definitely has a leg up with her lottery winnings.

With the assistance of the Gersh Agency, specifically Jay Cohen, the Queen Nefertari partners have been setting up meetings and putting together projects. Gersh’s film financing and packaging division represents the banner.
“We all want to do movies that are meaningful to us,” Kalligheri said. “We’re not just looking to make movies that make money – we want to make movies we would be proud to bring our families to. But we also want to make movies that are commercial, that make business sense.”
Stafford was quietly raising her late brother’s five children in Hawthorne, California, when she and her father and another brother bought a $2 Mega Millions lottery ticket. They won $112 million, but took a lump-sum payment of $67 million.
Since that life-changing event, Stafford has become a philanthropist, donating $1 million to the Geffen Theater and becoming part of its outreach efforts. She’s also involved with the National Resources Defense Council and other nonprofit organizations.
Stafford said she named her company after the Egyptian queen Nefertari because she was a patron of the arts, and “a queen for peace. She had tremendous power, a great love of herself and her family – that’s who I am.”
Stafford recently produced a pair of independent movies, multicultural coming-of-age tale “Polish Bar” and supernatural thriller “The Gathering.”
Kalligheri attested to Stafford’s love of moviemaking, saying, “She’d probably be collecting money door to door [if she had to] to make movies.”
Queen Nefertari expects to have its first film in production by the end of this month or, at the latest, the first of the year.
“We may even have three going at the same time in the spring,” Kalligheri said.
The company is looking primarily at commercial projects in four broad genres: comedy, romantic comedy, thriller/horror and faith-based. And “you can throw horror in as a fifth dynamic, because everybody learns a lesson from horror,” Kalligheri said.
Aiming for an Easter 2010 release is “Risen,” in conjunction with Hyde Park. “It picks up literally the day after ‘The Passion of the Christ’ left off,” Kalligheri said of the faith-based project.
Also in the works are “Undying,” a supernatural action-thriller the company is co-financing with Media 8 Entertainment, that’s out to actors; and “Judd Apatow-type comedy” “Operation Caucasian,” about two Asian-born guys whose sole goal in life is to get with an American girl.
They also have comedy “Adrenaline,” a co-production with Hollywood Farms that the partners described as “Wedding Crashers” meets “Hitch,” out to directors; it’s produced by Hollywood Farms’ Kirkland Tibbels and actor Matthew Lillard.
Idewu described Gersh’s involvement as "the glue to help us reach out cross-platform." Unlike the standard agency packaging, where they put together packages for their own talent, "Gersh is providing an entree, introducing us into filmmaking in the most collaborative way possible," he said.
"We’re meeting with ICM, CAA, WME, so we’re bringing together projects from all the big agencies and are working on them together," he added. "Gersh has been an accessory for us in that realm."
Stafford, meanwhile, has other irons in the fire. In addition to developing projects for television and the expanding mobile media markets, she is one of the producers of newZonia.com, a global internet portal that retails philanthropy. That venture, featuring a micro-economy that generates large resources for common global causes such as poverty, health care, the environment and education, will launch worldwide in the coming year.
That’s all in addition to raising five kids and overseeing several large investments, including an experimental cancer drug, and sitting on the Geffen board and acting as their education liaison.
As Stafford put it, "I’m very busy, but we’re having fun."