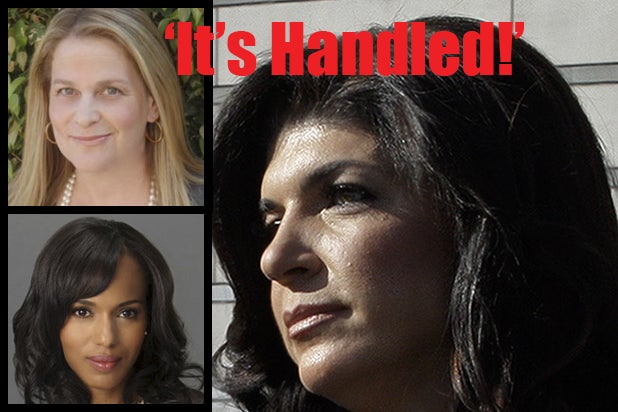 Editor’s note: ABC’s “Scandal character” Olivia Pope played by Kerry Washington is not affiliated with or based on Wendy Feldman or the situation involving Giudice, but merely TheWrap’s playful reference to the similarities between the fictional character and Wendy’s career as a real life fixer and crisis manager.

I made the decision to terminate the consulting relationship between Teresa Giudice and myself. This was a decision that was weeks coming and not an easy one. The issue made more complex by the many hats that I wear in most cases as a legal crisis manager and coach — I am after all the ultimate INSIDER. A real-life fixer, who lives, breathes and serves as an example for my clients.

In this case, as in many, I also handled all media appearances and oversaw ALL contracts with the aid of the proper lawyers. I build teams. That means for a person like Teresa, who is on a hit TV show, a lot of media management as well.

So, in short I inherited a MESS, and what I knew would be a difficult client. But that is my expertise — difficult clients having been one myself. In media and legal circles I am well known not as a publicist but as the ultimate protector. I did after all grow up in Hollywood and I did serve time in federal prison — a twofer for a Real Housewife from New Jersey.

I made it very clear to Teresa as recently as yesterday that the only reason I dealt with the various tantrums, missteps and side conversations was for her children. We both acknowledged this. Yet here we are with a very public battle and various reports have me keeping Teresa FROM her children. I have done the opposite to this moment. She is a good mother and the sole caregiver. But she needs to get real, humble and honest.

Teresa accepted a plea agreement that carried a Federal Guideline prison sentence of between 21-27 months in prison. Yet to this day she fails to accept the fact that Judge Salas had included 15 months in prison, holiday break with her children and in a rare move — a staggered sentence. I may not agree with the terms of the plea agreement and in fact advised against it, but as Judge Salas said: “deals are deals.”

The real reason I am setting the record straight is for the hundreds of clients I have who are inside prison right now and for those who have come out and changed their lives. That includes me. This also includes clients who I have worked with — many famous but most not — who have benefited from my help, appreciated my words and done the work to change their lives. I can write a million letters to a judge, but my words need to be felt deep in your soul.

The bottom line is that our prisons and courts are too crowded for sideshows and fictitious motions based on false promises. My job was to create a strategy that will lead to a reduced sentence, time in a camp and a successful re-entry. That result is now in jeopardy. This too is very sad.

The only party that has power over Federal Prison designations is the Bureau of Prisons (BOP) itself — certainly not me nor a divorce lawyer or lawyers who claim to have other influence.

At the end of the day, the designation will be handed down to the U.S. Marshals and, if one is not, Teresa — like any other person — will surrender directly to the Marshals and then await designation. It will only then become a harsh reality that I worked so hard to prepare her and her children for that may open her eyes and a healing begin.

Wendy Feldman is a Legal Coach and Crisis Manager, and leading expert on Alternative Sentencing today. The ultimate insider, Wendy is well established with various media outlets and also has a solid reputation in courts all over the country. As a coach she works with people to prepare for court, investigations, incarceration, alternative sentences and most importantly, re-entry into society. She is the author of the popular blog Notes From an Insider- and has recently been part of stories featured on, CBS Early Show, Today, Geraldo at Large, Fox News, NBC News, Nancy Grace, E! News, Discovery Network, BBC, The Washington Post, Slate Magazine, Business Week, The Wall Street Journal, Market Watch, US Magazine, People Magazine, Fox News.com and Los Angeles Times. She is a regular on Entertainment Tonight and The Insider. Wendy is featured on the E! series Secret Societies of Hollywood and ABC News.