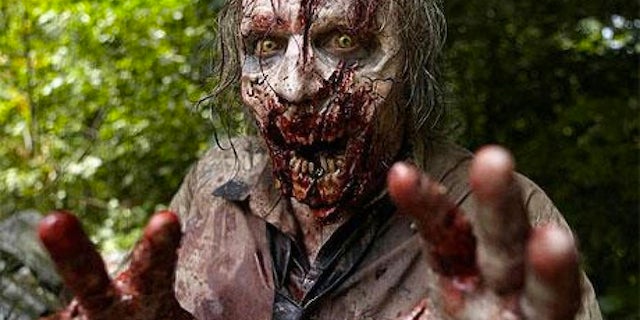 That doesn't mean they're done with zombie projects — given the $66 million weekend take for Brad Pitt's "World War Z," they plan many more. But Hollywood now has so many features about the living dead that any new zombie pitches are a hard sell, insiders tell TheWrap.

Also read: ‘Monsters U’ Scares Up $82M to Hold Off Brad Pitt’s ‘World War Z’ at the Box Office

"I was just at an event two weeks ago where I was on a panel," said Magnet Management's Mitch Solomon, who sold Larry Brenner's vampires-and-zombies screenplay "Bethlehem" to Universal. "The first thing I said was, 'No more zombie scripts.'"

He said that "it would be extraordinarily difficult without some underlying property to do a zombie project" for film or TV.

Among the zombie projects on their way to the big screen are Lionsgate's adaptations of the video game "Dead Island" and Seth Grahame-Smith's book, "Pride and Prejudice and Zombies." The comedic zombie projects "Scouts Vs. Zombies" and "Kitchen Sink" are in the pipeline for Paramount and Sony, respectively.

Also on the horizon is an adaptation of Stephen King's zombie novel, "Cell." Tod Williams ("Paranormal Activity 2") is set to direct the Benaroya Pictures and Cargo Entertainment co-production, in which John Cusack stars as a survivor navigating New England after a cell phone signal turns the population into murderous "phoners."

The outbreak has become so severe, the former governor has decided to intervene. Arnold Schwarzenegger has just signed on to star in "Maggie," an independently produced zombie film about a teenage girl infected with a virus that slowly turns her into one of the walking dead. California's former chief executive will play her father, who helps his daughter come to terms with her fate.

Television is far from immune: AMC's "Walking Dead," based on a hit comic book of the same name, was the top show on television last season, aside from NBC's "Sunday Night Football."

Also read: Jesus, Zombies and a Bad Night for Broadcasters: Is This the Future of TV?

Hollywood has cycled through slashers, vampires, ghosts and monsters for decades. But as Michael Zoumas, the executive producer of 2009's "Coraline," told TheWrap, "World War Z" marks a possible peak in the zombie cycle.

"When a big superstar like Brad Pitt makes a zombie movie, you’ve probably reached a peak or you're pretty damn close," Zoumas, who has also produced several horror films, told TheWrap. "The market is full, so what you could have done a few years ago you're not going to be able to do today. You have to continue to innovate."

USC film professor Nitin Govil, who taught a class called "Zombie Media," noted that the climb toward "World War Z" — the industry's first $190 million zombie tentpole — can be traced back to 1932's "White Zombie" and George A. Romero's 1968 horror classic "Night of the Living Dead."

But he said it also owes a debt to more recent films.

"I think Danny Boyle's '28 Days Later' [and] 'Resident Evil', those films and the uptick in video games, comic books and that kind of transmedia phenomenon really secured a place for these types of films," Govil said. "It's been interesting that we haven't had a massive, big-budget zombie movie, but it's not surprising — given that there have been so many really, really good small-budget zombie movies."

"I think the $190 million zombie epic is dead before it starts," Bock told TheWrap. "Whether a success or not, it's just way too much to spend on the horror genre. I think 'The Purge' pretty much cleared that up."

"The Purge," a futuristic home invasion thriller that cost $3 million to produce, opened number one at the box office earlier this month to $34 million domestically. And that was without any zombies.

Still, audiences that flocked to theaters over the weekend to see "Z" seemed to enjoy the spectacle. The movie received a B+ CinemaScore, while garnering a 68 percent "fresh" critic rating on Rotten Tomatoes

For Zoumas, it's only a matter of time before the studios' interest in zombie projects begins to dwindle. But zombies, like ghosts and vampires, have a habit of rising from the grave.

"I don't think they will ever go away. It's like everything else," Zoumas said. "The studios will go through the cycles, and right now we're in the zombie cycle. If there's a disastrous zombie movie, studios won't make them for a while… until they do again."