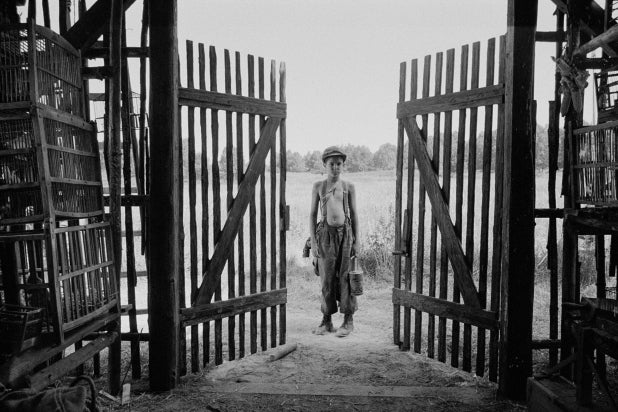 IFC Films has acquired the U.S. rights to “The Painted Bird,” a Holocaust drama starring Stellan Skarsgård, Harvey Keitel and Udo Kier that played at Venice and Toronto earlier this year, the distributor announced Tuesday.

“The Painted Bird” is directed, written, and produced by Václav Marhoul (“Tobruk,” “Smart Phillip”) and is based on the novel by Jerzy Kosinski. The foreign language drama will be the official Oscar submission from the Czech Republic. IFC Films is planning a theatrical release for 2020.

The film was praised on the festival circuit for its bleak, unsparing look at Holocaust atrocities and evil, but the nearly three-hour saga, all in black and white on 35mm film, also prompted walkouts among moviegoers and split some critics.

“Marhoul’s film isn’t shy about the steady stream of ugliness, and that’s likely to turn away the terror-sensitive, and yet its immersive aesthetic also allows for the visually poetic and compassionate, even if those moments are few and far between,” TheWrap’s Robert Abele wrote in his review from Venice.

“The Painted Bird” stars Petr Kotlár, Udo Kier, Lech Dyblik, Jitka Čvančarová, Stellan Skarsgard, Harvey Keitel, Julian Sands, Aleksey Kravchenko, and Barry Pepper. The story follows the journey of The Boy at the end of World War II as he’s entrusted by his persecuted parents to an elderly foster mother. The old woman soon dies, and the Boy is on his own, wandering through the countryside, from village to village, farmhouse to farmhouse. As he struggles for survival, The Boy suffers through extraordinary brutality meted out by the ignorant, superstitious peasants, and he witnesses the terrifying violence of the efficient, ruthless soldiers, both Russian and German.

“‘The Painted Bird’ is a brilliant cinematic achievement with a fiercely accomplished cast to match. We’re incredibly proud to bring such a monumental film to audiences across the country,” Arianna Bocco, EVP of acquisitions and productions of IFC Films, said in a statement.

“IFC Films is committed to providing thought-provoking and challenging films, and this is a prime example of maintaining this core mission and continuing our legacy for nearly 20 years now,” Lisa Schwartz, co-president, IFC Films said in a statement.

“We are delighted to be working with IFC again. Their curation is extremely astute, and they have unparalleled expertise with important, provocative movies. We look forward to this new adventure and to American audiences responding to a 21st-century masterpiece. We are also grateful to Federica Sainte-Rose at CAA for her support throughout the festival and sales circuit this fall,” Hengameh Panahi, president of celluloid creams and VP Charlotte Mickie said in a statement.

“I am extremely gratified that IFC has acquired ‘The Painted Bird.’ They have demonstrated a deep, sensitive understanding of the message of the movie, which is so important in today’s volatile world. I deeply believe the movie’s advocacy of tolerance, fellow-feeling and community must reach American audiences. IFC will make that happen,” Marhoul said in a statement.

The deal for the film was negotiated by Arianna Bocco of IFC Films with CAA Media Finance and Celluloid Dreams on behalf of the filmmakers.

News of the acquisition was first reported by Variety.