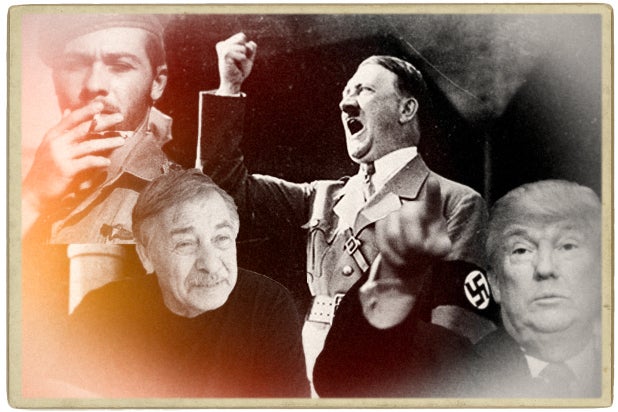 Back in March — before Donald Trump became the Republican nominee — I asked my father, a Holocaust survivor, what he thought about the comparisons many have made between Donald Trump and Adolf Hitler. My dad not only witnessed the Holocaust first hand, he’s also an expert on Jewish history who spent years teaching about the Third Reich. His answer was measured. He was concerned but not yet ready to sound the alarm.

His unique vantage point seems to have struck a chord with readers. Nine months later, the article is still getting thousands of clicks a day. Now that Trump has won the election (and was endorsed by the Ku Klux Klan), I was curious to know if my father’s opinion had changed.

“Not only has my concern not dissipated, it’s grown much stronger,” my dad, Zeev, told me from his home in Tel Aviv. “I don’t believe another Holocaust is imminent. But it’s hard to ignore the similarities between Trump and Hitler.”

Anyone who knows my dad will tell you that he’s not a man who scares easily. When he was just 4 years old, his dad — my grandfather — was taken away to one of Hitler’s labor camps, never to be seen again. He was killed at the age of 33.

The mass murder of Jews in Hungary, where my father was born, began towards the end of World War II, after the Nazi invasion in March 1944. At the time, close to 800,000 Jews were still living in Hungary. Most of them would perish.

The family story goes that on the day my grandmother and her two small children were rounded up for deportation and what would have been certain death, she was saved by a soldier who took pity on her. (My grandmother, I’m told, was strikingly beautiful). He shoved her and her small children behind a door. She managed to escape with the kids to a forest near a small village. For nine months, through the dead of winter, they all hid in a hole in the ground.

My dad later immigrated to Israel, where he served in the Israel Defense Forces’ most prestigious commando unit and fought in four wars.

But despite all of his hardships, he’s managed to keep a sunny disposition and an optimism that, at times, astounds me. He became a teacher of Jewish history so that the world will never forget.

Here’s our  follow-up interview, as translated from Hebrew:

Are you more worried now that Trump has won the election?
Not only has my concern not dissipated, it’s grown much stronger. Again, 1933’s Germany and America today are starkly different. And, contrary to belief, history does not repeat itself. Not the way people think. The world, as a general rule, moves forward. Enough has changed that I don’t believe another Holocaust is imminent. But it’s hard to ignore the similarities between Trump and Hitler.

How so?
Like Hitler, Trump was able to tap into voter anger. His supporters believe they’re being denied the American dream because of globalization. And that’s exactly what Hitler was able to tap into back in the 1930s. Hitler went after the Jews, while Trump is zeroing in on Mexican immigrants and Muslims.

Hitler was also a so-called “protest candidate.” He galvanized the disenfranchised, who were disillusioned with the Weimar Republic. That is something we’re seeing with Trump voters today who feel they were left behind and ignored by the current government. In their mind, America has lost its greatness.

Hitler, like Trump, was bombastic. The way he spoke, he seemed almost crazy, schizophrenic. And yet many people saw him as the country’s savior. Someone who could shake things up.

I’ve heard many of my friends say, “Maybe Trump won’t be as bad as we think.” What do you say to them?
I think that’s possible. As president he can’t get away with the things he said as a candidate. But the same was also said about Hitler when he first rose to power. People said, “Oh maybe it was just for show, so he could get elected.” No one thought he would actually do the things he said he would do.

What are the things people should pay attention to?
Most people will be focused on his failure to deliver on his promises. But it’s his success they should be worried about. Hitler was able to do what he did because he quickly turned Germany around. He built the German highway system, the underground trains and in 1936 Germany hosted the Berlin Summer Olympics, which by all accounts were impressive. A lot of people stopped questioning his authority after that. In their minds, he was bringing Germany to its old glory.

If you’ve seen the movie “Judgment at Nuremberg,” there is a scene where one of the Nazi judges explains why the country turned a blind eye to what was going on. He essentially told the court that things were going so well, no one thought to question anything.

Some people are worried that we’re handing a crazy individual the keys to the White House and that he has no business being president. What do you say to them?
I say, that’s a democracy. Majority rules. You must have a peaceful transition of power. But that doesn’t mean you shouldn’t be vigilant.

Trump has been railing against the press. Is that something we should be worried about?
Absolutely. It’s the hallmark of a totalitarian regime. In a true democracy, the media’s job is to attack the government. But the government can never go after the media. Luckily, America has a strong tradition of free speech. He won’t be able to shut down TV stations, or The New York Times, for that matter. But yes, that’s not something anyone should ignore.

Are you disappointed that someone like Trump could get elected president of the United States?
I think about that a lot. I can’t say that I fully understand it.

So how much more worried are you since the last time we spoke?
I’m definitely a lot more concerned. But as long as people keep him in check, we should be fine. American citizens need to hold his feet to the fire, as do Democrats in Congress.