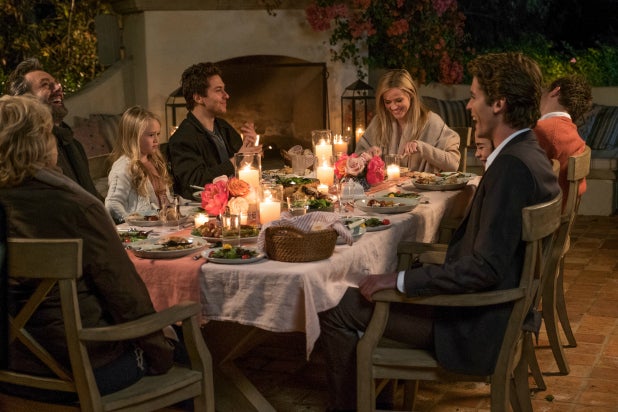 To paraphrase Thomas Wolfe, you shouldn’t go to “Home Again.” Despite the powerhouse presence of Reese Witherspoon, this limp little midlife crisis comedy leaves out the comedy and the crisis, and it certainly never comes to life.

Writer-director Hallie Meyers-Shyer — the daughter of filmmakers Nancy Meyers (who produced) and Charles Shyer — seems to be channeling her mother’s films “Something’s Gotta Give” and “It’s Complicated” with a portrait of a woman of a certain age torn between a younger lover and a disappointing husband. But an inescapable shroud of blandness covers everything in the movie: the characters, the relationships, the cinematography (by the great Dean Cundey), even the Witherspoon character’s Very Nice House (another key element to Meyers-Shyer’s parents’ work).

Alice Kinney (Witherspoon) decamps to her childhood home in Los Angeles, two precocious daughters in tow, when her marriage to music mogul Austen (Michael Sheen) starts falling apart. That home is an airy, enormous compound (complete with pool and guest house) once purchased by Alice’s late father, a 1970s director of the rebels-on-the-backlot school. (Perhaps titling the film “Sweet Home Bel Air” would have lacked that certain something.)

Attempting to get her interior design business off the ground — despite the fact that her own domicile has all the warmth and personality of a model home — Alice is knocked for a loop during her drunken 40th birthday celebration, when she meets handsome young director Harry (Pico Alexander, “War Machine”). Harry, his screenwriter brother George (Jon Rudnitsky, “Saturday Night Live”), and their actor pal Teddy (Nat Wolff, “Paper Towns”) had a hit short at SXSW, but while their agents dither over getting the feature made, they find themselves without a place to live in Los Angeles.

After they crash at Alice’s following a boozy night, Alice’s mom Lillian (Candice Bergen) is won over by the boys, particularly since they glowingly recall Lillian’s glory days as a 1970s cult film star. So the fellas move into the guest house, Alice embarks on a fling with the much-younger Harry, and Austen’s hackles are raised enough that he flies cross-country in an attempt to win his wife back.

Meyers-Shyer may be rom-com royalty, but none of her complications here ring true. For starters, it seems unlikely that a woman like Alice, who grew up the daughter of a movie legend and surrounded by the film business, wouldn’t have spent her entire life fending off wannabes like Harry and company. And for her big finish, Meyers-Shyer digs out the “gotta get to a child’s school play on time” finale that is one of the creakiest tropes of modern moviemaking.

“Home Again” also operates in a stultifyingly white bubble: the only characters of color with speaking parts are a generic agent and a blazingly stereotypical Indian motel clerk. The movie even throws in Lake Bell as a selfish, vapid socialite only to make Alice’s universe of privilege and wealth seem somehow home-spun.

Witherspoon brings all of her movie-star moxie to play in a role that never comes together on the screen since it isn’t on the page; there’s just no substance or specificity to Alice. (Or to her Greek chorus of wine-chugging pals, another lift from the Nancy Meyers playbook.) We’ve seen Sheen play this same charming bastard multiple times now, and Bergen scores the film’s one genuine laugh with a delightfully dry line reading.

While Rudnitsky and Wolff mostly coast on charisma, Alexander’s sheer vapidity actively undermines the movie. So much could be forgiven if Harry were so charming that Alice would be helpless before his magnetism, but he’s such a blank, douchey bro that her affection for him actually reflects poorly on her.

Sadly, even fans of Nancy Meyers‘ legendary movie kitchens will be disappointed by the one on display here, although perhaps that’s a perfect metaphor for a film that’s so dramatically malnourished.