In a scene toward the end of Apple TV+’s latest, “Home Before Dark,” the show’s heroine — Hilde Lisko, a 9-year-old investigative journalist with little patience for liars and secrets — gets up on a cafeteria table and stares down a classmate she had a run-in with earlier in the episode.

“You asked who cares about the truth,” she says, defiant. “I do. Because if the truth doesn’t matter, nothing ever will.”

Hilde’s speech, delivered with verve by “The Florida Project” breakout Brooklynn Prince, is met with a smattering of applause — followed quickly by a fistful of cafeteria meat to the face, because “Home Before Dark” takes more than a few cues from classic 1980s coming-of-age films like “E.T.” and “Stand By Me.”

Maybe Hilde’s classmates don’t share her passion for the truth. Or maybe they just care about food fights more than facts, because, you know, they’re children. But “Home Before Dark” does take the truth seriously. And it takes Hilde seriously, too, even while its adults are patting her on the head and laughing her off.

“I’m obsessed with this girl,” series co-creator and co-showrunner Dara Resnik said in an interview with TheWrap. “She’s unafraid in a way that we should be telling all little girls to be unafraid.”

The drama, which premiered on Apple’s fledgling streaming service this week, is inspired by the life of Hilde Lysiak, a real-life journalist whose self-published outlet scooped her local newspaper on the story of her neighbor’s murder when she was 9 years old. She’s since gone on to interview the likes of Nobel Prize winner Malala Yousafzai and former First Lady Michelle Obama and deliver the commencement address at West Virginia University Reed College of Media. 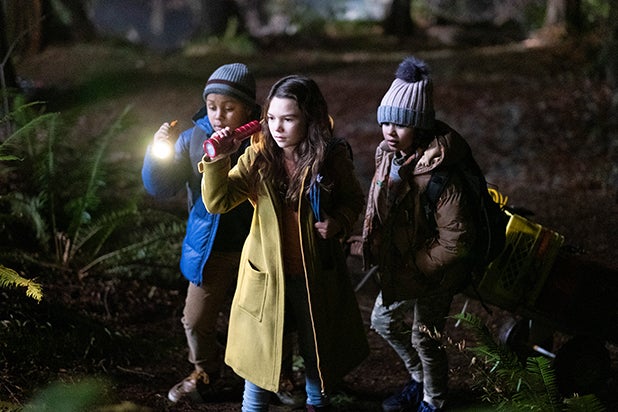 Resnik and her co-showrunner, “Ben and Kate” creator Dana Fox, take some liberties with Hilde’s story — hence the last name change — but the broad strokes are the same. A fearless fourth grader, enabled to an, let’s say, unconventional degree by her journalist father (played by “Across the Universe” star Jim Sturgess) moves with her family to a small town, where she noses her way into business that adults would rather not have her be apart of.

“One of my favorite things when I met them was learning that Hilde’s father always would let her do whatever she wanted to do,” Resnik said of consulting with the Lysiaks on the series. “And Hilde herself is really grateful for that. She says we always tell kids that they can be anything they want to be, and then we don’t let them do anything they want to do.”

Also Read: How the Story of a Real-Life 13-Year-Old Investigative Reporter Became an Apple TV+ Series

The relationship between Hilde and her father forms the emotional backbone of the show. In an early montage modeled after the opening scene of “Up,” it’s explained that Hilde’s father lost his job writing for a New York paper, and the family’s move to rural Washington comes at a time when he’s grown increasingly disillusioned with his career and the journalism business at large. For the real-life Matt Lysiak, it was his daughter’s passion that eventually reignited his spark.

“Every time we would get lost narratively, we would come back to that emotional truth,” Resnik said. “Hilde started reporting, and she brought her father back to life with her reporting.” Not that that ethos didn’t sometimes come with its own set of challenges. “Hilde herself is actually very hard to get to know,” she said. “Because she doesn’t want to be the story. She wants to report on the story.” 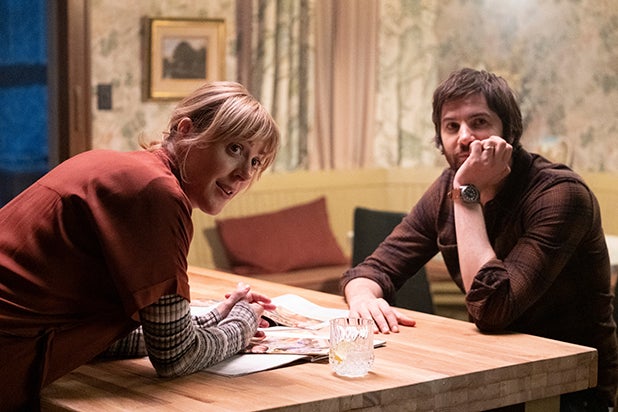 To fill in those blanks, the show relies on its young star. Prince, who burst onto the scene with a star-making turn in Sean Baker’s 2017 indie “The Florida Project” when she was just 6 years old, has a natural talent and on-screen charisma that wouldn’t be out of place in many of those same Amblin films that “Home Before Dark” takes as its inspiration. Resnik describes her as “a ball of empathy.” In that sense, at least, the polar opposite of Lysiak. “Every moment is visceral,” she said.

“The thing that really sold it for me was when we did this audition over the internet with [director] Jon Chu,” Resnik said. “Brooklynn was with the father. And they have peer relationships that’s a lot like the relationship between real Hilde and her father. It’s a really interesting thing. I always say it’s almost like they’re a couple, but that sounds creepier than I mean. There’s a banter and a genuine respect as a fully-formed human that each of those dads has for their child, which I think is one of the things that makes their kids exactly who they are.”

Beyond her performance in the audition, which Resnik said was “flawless,” it was that natural understanding of the father-daughter dynamic that sold Resnik on Prince as the only actor who could star in the show.

She singled out one exchange when Prince’s father missed a cue during the reading and his daughter was quick to correct him: “I knew in that moment that she was going to understand what this relationship was between Hilde and her father, which as I said is the emotional core of the show, that love and that care. I literally saw it both in real life and then, you know, on-screen as she was acting it out. So it was a complete no brainer.” 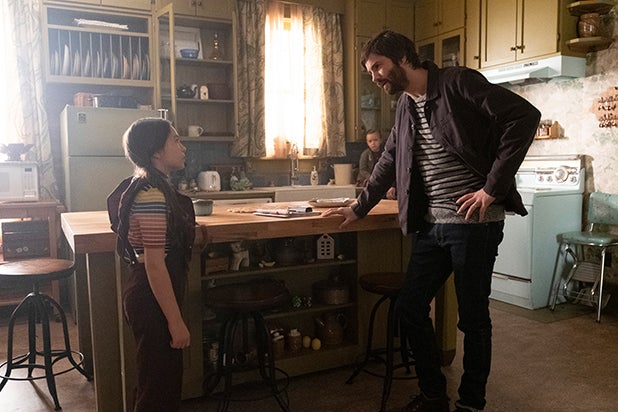 The key similarities and specific differences between the real-life Hilde Lysiak and the actress who portrays her come together to create the Hilde Lisko that anchors the 10-episode run of the show.

“What we ended up creating — which is something that I really think is special — is an amalgamation of a human that both sees the world, and is desperate to know what the facts are, but also is incredibly sensitive to the human experience in a sort of preternatural way,” Resnik said.

“Home Before Dark” seizes that point of view and runs with it, even incorporating it into the show’s visual elements. Directed by “Crazy Rich Asians” helmer Jon M. Chu, the first two episodes set the template for the rest of the season, frequently positioning the camera at its heroine’s eyeline and making a point to show us the world as she sees it.

Resnik credits much of that character to the show’s director of photography, Alice Brooks, a college friend and a longtime collaborator of Chu’s. “She knows what it’s supposed to look like,” she said. “It’s so important in a world that doesn’t have a lot of successful female DPs to be seeing it through the lens of someone who understands what it’s like to be a little girl.” 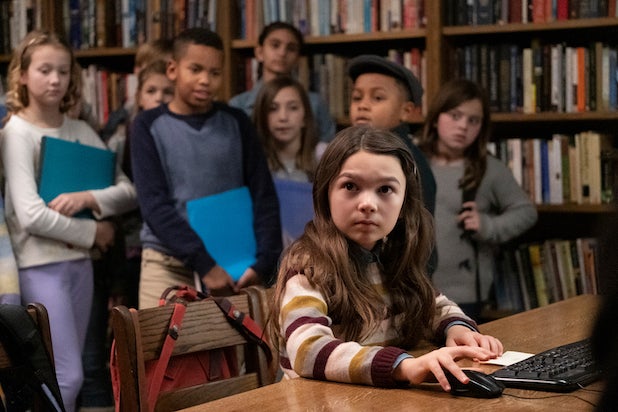 Apple has already picked up “Home Before Dark” for a second season. The cast and crew were about halfway through filming the next run of episodes when the coronavirus pandemic forced the mass shutdown of film and TV production last month. Writing on the episodes had already been completed, meaning that Season 2 has come to something of a standstill while we await the light at the end of the tunnel.

Still, Resnik hopes there can be a positive outcome from a show committed to the truth debuting at a moment when the world needs it more than ever.

“Weirdly, it seems right for the show to come out in the middle of all this, even if it means we’re putting a pin in production,” she said. “We’re in a scary time. Facts are being vastly misreported and manipulated and talked around. And kids are home with their parents and they’re scared. I’ve had a lot of friends who have said to me, ‘Oh, what are you telling your daughter about the pandemic?’ And I said, ‘I’m telling her the truth.’ I’m telling her what a virus is, and I’m showing her, you know, age-appropriate information online about what it is and how you catch it and telling her that it’s okay to be scared. And sometimes I’m scared, too.”

“I’m deeply hopeful that what we always wanted from the show, which was to be an example to other families of how to have hard conversations — hard, truthful conversations — that we can do that in this environment, and they can actually, truly take something out of that and hopefully have those hard conversations themselves in a really difficult time.” 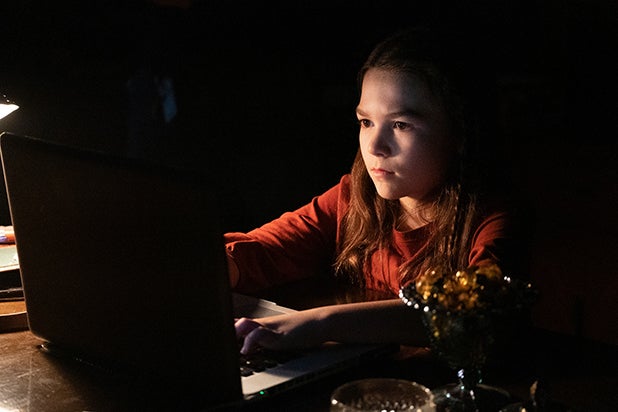 “Home Before Dark” is now available to stream on Apple TV+.