This year, electronic sales of movies and shows are expected to cross the billion dollar mark, thanks to aggressive studio marketing and growing consumer confidence in cloud storage of digital files.

Consumers can now watch movies at home two to four weeks before they hit stores if they opt for an electronic purchase. And they can watch them across multiple devices thanks to cloud technology.

“For this to work, we need to recapture the growth and momentum that we last saw in the DVD business,” Mike Dunn, 20th Century Fox Home Entertainment president, told TheWrap. “It’s still early, and it’s a small base, but it’s moving fast in the right direction.”

When his studio released “Epic” on home entertainment last month, TV ads and web spots for the animated hit hammered home the benefits of digital ownership. To gin up excitement, the studio hosted viewing parties, invited bloggers to host “Epic” camping excursions and talked up the virtues of Digital HD, a more user-friendly name for what was once called “electronic sell-through.”

The results have been encouraging. Fox reports that digital sales since last September are up between 200 to 400 percent over comparable titles from the previous year, with “Epic” its most successful family title in terms of digital purchases.

The studio got the digital ball really rolling last year when it offered “Prometheus” for download at a $14.99 price point that attracted many consumers — about 30 percent — who bought a download for the first time. The segment has shown growth since “Prometheus”; roughly 40 percent of the people who purchased a digital HD copy had never bought movies or shows electronically before.

Fox isn’t alone. Across the industry, there are signs of life on iTunes, Amazon and other internet platforms. Electronic sales of movies and shows are on pace to increase 50 percent this year and to hit $1.3 billion, the first time revenues have topped the billion dollar mark. Industry executives expect similar growth in 2014, with sales hitting $2 billion. 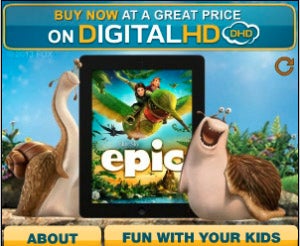 Executives point to the value-proposition of ownership: Each major studio has begun releasing films digitally at least two weeks before discs hit. On the television front, networks that once waited for a new season to premiere before releasing the previous one on DVD are debuting them digitally as soon as a season wraps.

Earlier availability for digital download is the key factor in explaining growth — but there are other causes.

Customers are feeling more secure about long-term retention of their digital movie purchases thanks to UltraViolet. The cloud-based format is driving growth as it increases its own user base — the number of UltraViolet accounts have jumped from 8 million at the start of the year to more than 13 million.

“It’s getting more user friendly,” Mark Horak, president of North America at Warner Home Video, said. “People are now able to access their content at any time, anywhere and on any device.”

“It has served as the training wheels of digital consumption,” Dunn said. “They have 30 million subscribers accessing multiple Netflix apps across different devices and they’re paying for content instead of pirating it. It paved the way to move subscribers into a transactional business.”

While the the overall home entertainment market showed signs of stabilizing last year, revenues for the most recent fiscal quarter fell 1.4 percent to $3.94 billion on weaker DVD sales and rentals, according to the Digital Entertainment Group. This has given studios added incentive to lure customers into making digital movie purchases.

“All the projections show that physical sell-through is in permanent decline, so studios need to see what they can do to get the electronic side going,” Tom Adams, a media analyst at IHS Screen Digest said.

So far it seems to be working. A year ago, the breakdown between digital sales of films and rentals was roughly 10 percent to 90 percent. That split has improved to the point where sales account for 20 percent, studio executives tell TheWrap.

Unlike the music industry, which had to live with giving up record sales for 99 cent downloads as a sacrifice to the internet age, the movie business is not exchanging physical dollars for digital pennies. The average digital copy of a film retails for approximately $15, which is only slightly less than the $20 or more a Blu-ray costs to buy.

And a stabilizing home entertainment market is good news for content creators.

“To the extent it stabilizes that revenue, it gives studios more leeway to invest in films,” Tony Wible, an analyst with Janney Montgomery Scott, said.

As more studios get into the habit of offering electronic editions early, the novelty will wear off, making extras and other goodies that come with digital ownership more important. To that end, studios say they are working on making digital copies of films more interactive by offering features that allow viewers to engage with a particular scene in real-time.

“We’re looking to improve the experience around digital so it’s not the same linear experience that users get in the physical world,” David Bishop, president of Sony Pictures Home Entertainment, said. “We’re looking at ways to deliver the content with metadata that allows you to touch a screen and find out who a particular actor is or to pull up the director’s commentary.”

Making those extras available across multiple platforms is a hurdle. Studios have experimented with special iTunes-only editions, but the technology doesn’t exist to make that kind of metadata seamlessly accessible across the internet landscape.

Executives predict that kind of innovation is still a year away.