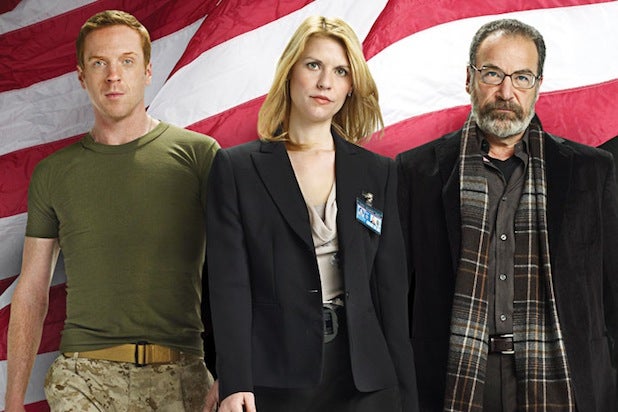 The “Homeland” cast and crew got a lesson in Top Secrecy from the CIA on Monday.

The Showtime spies met the real spies in a three-hour afternoon visit to the Central Intelligence Agency on its Langley, Virg., campus.

What did they discuss?

“I’m not allowed to talk about what we talked about — and I’m not kidding,” showrunner and executive producer Alex Gansa told TheWrap. But he would admit that the agents had a few technical issues with the show.

“They busted our chops a little bit about some of our things,” he said. “You really can’t bring a cellphone in or be at work with a cell phone at the CIA. And we constantly have people calling on cell phones from the CIA.”

The “Homeland’ crew was in Washington, D.C., to attend a screening of the series’ Season 3 premiere for congressional and administration officials. On hand were stars Claire Danes, Damian Lewis, Mandy Patinkin, Morena Baccarin, as well as Gansa and executive producer Alex Cary, and Showtime’s President of Entertainment David Nevins.

Gansa, Lewis and Nevins talked to TheWrap on the red carpet prior to the evening screening, at Washington’s Corcoran Gallery.

Lewis said he was impressed with the real-life agents’ hospitality. When asked if the experience might affect his characterization in the show, he said: “None that I can reveal here.”

Asked whether the show would address the Syrian crisis this year, Gansa said that while it is possible future seasons of the series might touch on the current hot-button issue, this season’s episodes, which debut on Sept. 29, were written before the recent developments heightened attention to the country.

“It’s a little too late for Syria,” he said. “The Israel/Iranian conversation is what this season is about.”

For his part, Nevins said this year’s episodes “made some really bold and smart choices” that will make the series’ episodes very different that the first two seasons.