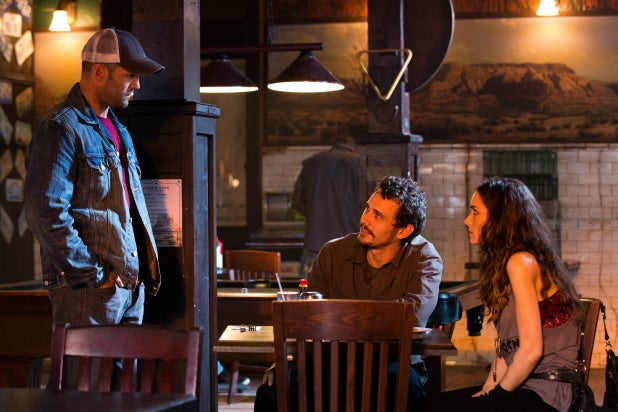 If “effective” is all you’re looking for from a movie, “Homefront” — a caffeinated actioner about a former undercover cop striving for anger management and good parenting — gets the job done with flair, larded with the usual helping of self-deprecation.

Loaded to the gills with shootouts, exploding drug labs, bulging biceps and an incompetent moll played by Winona Ryder, the movie stars a studly Jason Statham as Phil Broker, a former narcotics agent seeking a peaceful new life in the bayou boondocks.

Having dispatched a bunch of bad eggs to jail or the hereafter in a pumped-up set piece that literally shook the ground beneath my feet, Broker turns up two years later to put down roots in a small Louisiana town where sunlight twinkles through the leaves, that sort of thing.

Retooling himself into a standup fellow and nobly widowed single dad, Phil devotes himself to the care of his boyishly cute daughter Maddy (Izabela Vidovic). When a fracas between Maddy and a pint-sized bully on the playground turns ugly, Broker quickly discovers that this bucolic haven is in fact a town without pity run by James Franco.

Even the portly, hail-fellow-well-met sheriff (Clancy Brown) is under informal contract to the local drug lord Gator (Franco, playing at one amused remove from his usual screen character) with entertainingly inept help from Ryder, as Gator’s girl friend, in the loosest sense, and also his number one customer.

As luck and lazy plotting would have it, some old enemies also lurk in the neighborhood with uncharitable plans to blow Phil’s cover, along with everything he holds dear. But as we all know, Rambos never die.

Director Gary Fleder (“Don’t Say a Word”) directs with brutish panache, and Sylvester Stallone‘s screenplay (based on the novel by Chuck Logan) is quite okay and intermittently funny, albeit hampered by Statham’s accent, which commutes alarmingly between Derbyshire and Generic Amurrican.

Ladies hover at the edges, among them an alluring school psychologist (Rachelle Lefevre) awash in chestnut curls, and a very good Kate Bosworth in lank hair as a junkie mom with more to her than you might expect.

Expect no serious nookie though. There’s no time for sissy stuff, what with all the maiming, firing and blowing stuff up still to be accomplished.

And yet, at the slick heart of “Homefront,” there trembles a profound dilemma: How to fill up the screen in between bone-shattering set pieces that culminate in a charmingly protracted torture sequence and threats of worse to come in future sequels? More pertinent: how to get the lady bums in the seats on date night?

Fleder and Stallone have a solution as deft as it is corrupt: Pile on the pious guff about family values, which provides added leeway for a long sequence in which a child is locked in a box and made to shriek with terror.

Which, if nothing else, gives me a smidgen more respect for Quentin Tarantino, Robert Rodriguez et al., who at least had the grace not to pass off “Sin City” as an empowerment seminar for girls.