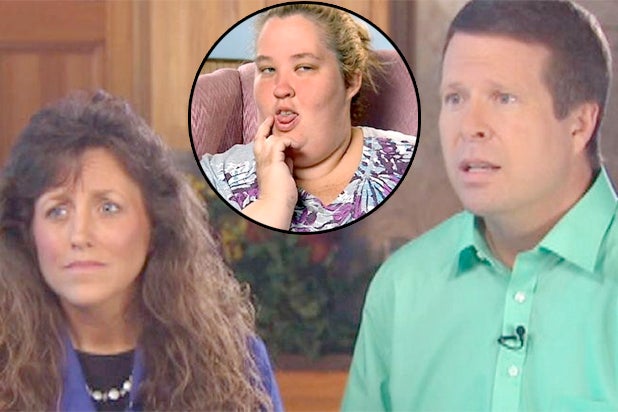 “Here Comes Honey Boo Boo” star “Mama” June Shannon is doubling down on her issues with TLC for failing to cancel “19 Kids and Counting” after the religious family was struck by a sexual assault scandal last month.

While TLC has made no decision about the future of “19 Kids,” Shannon claimed the network canceled “Here Comes Honey Boo Boo” seven hours after allegations arose that Shannon was dating a convicted child molester. She has denied being in a relationship with the man, and still denies it.

“I do think it’s a double standard,” Shannon told TheWrap. “They’re kind of like backing them. They have a lot of high exec people hanging out with them.”

Josh, the eldest of Jim Bob and Michelle Duggar’s children on TLC’s “19 Kids and Counting,” has admitted to fondling five underage girls, including four of his own sisters, when he was a young teen. He has since resigned from his position with the Family Research Council.

Three weeks after the information first became public, TLC has not made an official decision about the future of the show aside from yanking all currently airing episodes from the air.

Shannon said that based on her own experience, she suspects that TLC execs have been coaching the Duggars in all of their public appearances, including the interview Fox News’ Megyn Kelly broadcast with Jim Bob and Michelle Duggar as well as daughters Jill Dillard and Jessa Seewald.

“They’re telling them what to say, or what to do, or not what to do. Because that’s how they worked with us. ‘This is what you’re gonna say, you’re gonna stick to it,'” Shannon said. “When we went through the canceling of the show, they wouldn’t let us put our own statements out. They wrote them up and they were released to the public as a write-up mock interview.”

Network reps have not responded to TheWrap’s requests for comment.

Shannon also believes the Duggar situation is far more serious and troubling than anything she and her family did.

“What Josh did and what happened to the Duggar family was a whole lot worse than what we were doing,” she said. “I didn’t cover up anything, I was honest from the very beginning. I didn’t touch anybody, I didn’t lie. I haven’t lied. The kids have not lied.”

In October, Shannon was accused of carrying on a relationship with Mark McDaniel, a 53-year-old who served 10 years in prison for molesting an 8-year-old relative of Shannon’s. The abuse of the child included forced oral sex. McDaniel was released in March and he’s now a registered sex offender in Georgia.

“I would never ever, ever put my kids in danger. I love my kids too much,” Shannon said in a statement at the time. “That is my past. I have not seen that person in 10 years.”

Shannon previously said she is considering suing TLC for the unfair way “Honey Boo Boo” was treated in light of the Duggar scandal, but nothing has moved beyond meeting with her lawyers.

“We have not went any further than weighing options,” she said.

There have been rumors that TLC could spin off “19 Kids and Counting” with a show centering on popular members of the family, Jill and Jessa, two sisters who are both newlyweds and who both recently revealed they were two of Josh’s victims.

And Shannon teased the “Honey Boo Boo” gang will be back on TV in the near future.

“We will be back on TV one way or the other,” Shannon said, promising an announcement in the next month or so. “But we will not be back on the TLC network.”