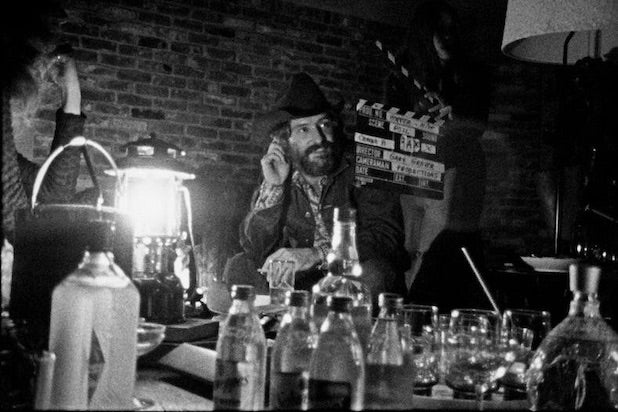 For almost 40 years, the 100 hours of surviving footage that Orson Welles shot in the early 1970s for the movie “The Other Side of the Wind” remained largely unseen. First the director struggled in vain to finish the film, then its rights were tied up after his death. But that four decades of frustration has turned into a flurry of activity: In the last two years, that footage has been used not only in the completed version of “The Other Side of the Wind” that finally premiered at the Venice Film Festival in 2018, but in two different documentaries about the film, Morgan Neville’s “They’ll Love Me When I’m Dead” and Ryan Suffern’s short doc “A Final Cut for Orson.”

And now it’s serving as the basis for yet another side of “The Other Side of the Wind,” and another posthumous film on which Welles is credited as director. “Hopper/Welles,” which premiered at this year’s scaled-down Venice festival, is a single extended conversation that Welles filmed in 1970 between himself and actor-turned-director Dennis Hopper. Where “Other Side” was wild and sprawling, “Hopper/Welles” is simplicity itself: There’s no context and little setup, just a pair of introductory title cards and then the men talking for more than two hours while a couple of cameras circle the action, which is all verbal.

At the time, both men were formidable auteurs. Welles was the icon who’d never topped the titanic impact of his first film, 1941’s “Citizen Kane,” and who’d long been kept at arm’s length by Hollywood; Hopper had created a stir with his 1969 directorial debut, “Easy Rider,” and was shooting his second film, the experimental “The Last Movie,” which would prove to be a commercial and critical flop.

Welles and Hopper were both talkers, as other works have shown: L.M. “Kit” Carson’s 1971 documentary “The American Dreamer,” filmed around the same time as “Hopper/Welles,” largely consists of the actor-director going on and on about life, art, sex and “The Last Movie,” while Henry Jaglom’s recorded lunchtime conversations with Welles in the 1980s would later be turned into the book “My Lunches With Orson.”

So Filip Jan Rymsza, who produced “The Other Side of the Wind” and is also in Venice with his narrative feature debut, “Mosquito State,” had some world-class pontificators to work with as he assembled “Hopper/Welles.” The result is a feature that is alternately fascinating and frustrating, a 130-minute conversation that finds Welles prodding and needling Hopper, who clearly enjoys some give-and-take but gets tired (as we do) of his inquisitor’s relentless contrariness.

Part of this, it seems, is because Welles is asking Hopper questions in the persona of Jake Hannaford, the legendary, macho and fictional Hollywood director who is the main character in “The Other Side of the Wind.” But Hannaford is widely thought to have been based on Welles and was originally supposed to have been played by Welles, so it’s often hard to tell whether he’s really playing a character or using that character as an excuse to be a slightly exaggerated version of himself. (John Huston would eventually play Hannaford in “Other Side,” but he wasn’t cast until four years after the conversation with Hopper, snippets of which were used in the film.)

Hopper, on the other hand, is either being himself or playing himself, though he’s clearly aware of and playing along with the artificiality of the situation: “Jake, you’re a hard man to talk to!” he says when Welles gets testy.

The film was shot in black-and-white by Gary Graver, who’s credited as the director on the clapper boards that regularly interrupt the action. It has a rich, shadowy look, with Hopper sitting at a table lit by hurricane lamps and by the glow from a fireplace behind him. Camerapeople and other staffers walk through the frame from time to time or can be glimpsed in the background, but most of the time it’s hard to make them out. And Welles himself is only a voice — he’s lurking in the darkness somewhere, but we never get a clear shot of him, though we can tell he’s walking around the room by following Hopper’s gaze.

For a movie that consists entirely of conversation, “Hopper/Welles” is restless and jittery, constantly cutting between different hand-held cameras that dart around Hopper and bring him in and out of focus. You’d think it would be easy to get your bearings in a film that consists of two characters in one setting, but Welles’ footage made sure that isn’t the case, and Rymsza isn’t interested in clearing up what Orson obscured.

But “Hopper/Welles” isn’t about setting or clarity; it’s about the words and concepts that bounce back and forth between the two directors. They start out talking about movies — and while Hopper had acted in films that included “Rebel Without a Cause,” “Giant” and “Cool Hand Like” by that point, all of his cinematic reference points seem to be European: Alain Resnais’ “Last Year at Marienbad,” Luis Bunuel’s “The Milky Way,” Michaelangelo Antonioni’s “L’Avventura” and “La Notte.”

“I went to see ‘L’Aventura’ seven times,” Hopper says of Antonioni’s slow-paced drama. “I still haven’t seen the movie. I liked the movie, but I fell asleep every time.”

He’s prodded by Welles to talk about politics in movies, but he also brings up politics in the art of Diego Rivera and the songs of Bob Dylan. “Who’s that?” Welles says when Hopper quotes Dylan, but maybe it’s Hannaford being ignorant of the songwriter.

While Hopper does most of the talking, Welles is prone to magisterial pronouncements, some of which are hard to top. When a discussion of art, magic, miracles and religion turns into a query into the nature of God, Hopper asks, “Is God into sex?”

Welles chuckles. “Well, a couple thousand years ago, he knocked up a little Jewish girl, and they’ve been talking about it ever since,” he says.

There’s more than two hours of this talk in “Hopper/Welles” — and for at least an hour of that, Welles has the younger man on the defensive. “How do you get off calling it unhappy?” Welles prods when Hopper says he had a miserable childhood. “Isn’t that romantic? Are you convincing yourself you were unhappier than you were?”

In the final 30 or 40 minutes, Hopper tries not to talk about his political views, and Welles refuses to let him off the hook, poking at every statement and challenging even the most off-handed assertion. There’s some fascinating give and take, with Hopper trying to be genial and Welles clearly unaccustomed to conceding anything or ever giving up the moral or philosophical high ground.

As intriguing as can be, Welles (or is it Hannaford?) also gets pretty annoying, twisting Hopper’s words in order to provoke him. It is clearly an exhausting conversation for Hopper, and at a certain point it’s a pretty exhausting one for the audience as well, particularly when Welles seems most clearly to be playing the character. (If you haven’t seen “The Other Side of the Wind” and don’t know the Hannaford character, it’s easy to just assume that Welles was a jerk.)

But seeing him as a jerk doesn’t mean you can dismiss him. Even as a doomy voice coming from the shadows, Orson Welles is a formidable presence, and Dennis Hopper a provocative, beguiling one. Their filmed conversation may be more of a curiosity than anything else, but it’s a challenging and occasionally intoxicating curiosity.